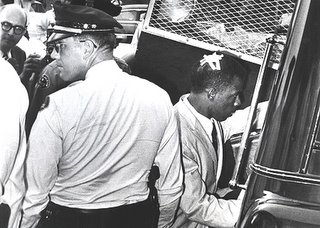 I worked for him as an intern back when I was a fresh and smiling young undergraduate. That injury you see there on Congressman Lewis' head was more serious than anyone knew. He has a mild speech impediment to this day.

There are principled men in Congress. They're rare, but there stands one, now. John Lewis' integrity survives the scrutiny of working with him every day for a year, believe me.

Years later, as a semi-unemployed musician dating the daughter of a wealthy attorney from Macon, Georgia, I found myself watching the news with Counsellor Dad. John Lewis was interviewed for some story or another, and this shithead erupts with a stream of abuse about "that mushmouthed nigger from Atlanta."

I stood up, told the old man he didn't know what the fuck he was talking about and that Lewis had more integrity in his toenail clippings than the fat old white man swilling 12 year old scotch in front of me, and walked out of that house forever.

Things were a little rocky with the gf for a while, and then we broke up, but that hardly seems worth mentioning now.

Have heroes. That's what I learned from John Lewis. There are men good enough to admire.