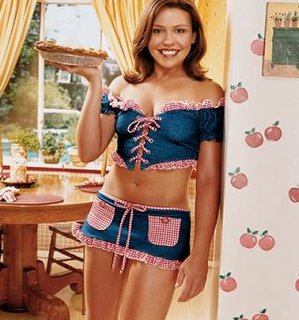 Excuse me, but is that a pleat?

LAKE LUZERNE, N.Y. -- Rachael Ray makes lousy coffee. She doesn't bake too well either. It's all the measuring. It clashes with her beat-the-clock cooking style. "I can never remember if it's one heaping, or two little or two big, or whatever," she said....

Not everyone is won over, though. Ray has attracted a cadre of vehement critics who complain she is slapdash, ignorant of culinary basics and says goofy things like "Yum-O." Grousers on Web forums pillory her for cooking escarole in bacon fat, for her clothes and everything in between. Says one Web poster: "Somebody gag her with a bottle of E.V.O.O., already."

Ray shrugs at the personal criticisms.

"I have no argument with them because they're correct," she said. "I'm very loud. I have a sharp voice. I do laugh and giggle too much -- for some people's taste. What am I going to do? Stop being me?"

Okay, it is reassuring to know I'm not the only one, and it's even possible there are others out there who agree that the fact that someone who cannot be bothered to learn how to bake nevertheless becomes a colossal media food enterprise (something which for some reason requires posing in lingerie from the Al Capp Collection while holding a pie someone else must have made) because she's likeable is, somehow, a metaphor for how we wound up in Iraq. But it is nice to see some evidence, however small, that the folks at Harpo have decided to give honesty a shot, even if it's only when there's no way around it.
Email ThisBlogThis!Share to TwitterShare to FacebookShare to Pinterest

I have always found hookers more honest that many "upright" women.

awww, don't be so hard on Rachel. Lots of people love to cook and hate to bake. Throwing in things by the handful: fun. Measuring an eighth of a teaspoon of something: fuggehtaboutit.

I'll give Rachel my full support if she'll hurl that pie in mAnn Coulter's face.

Have SC Johnson promote her show - all she needs to do is answer the door packaged in Saran Wrap.

That would do, for starters.

Not that anyone is obliged to like anyone, but I find much of the criticism of Rachel to be rather misogynistic in tone. She is criticized for having too much fun, while Martha Stewart is criticized for - to a first approximation - not having enough.

And yet no one criticizes Bobby Rivers for being a goofball airhead, or Marc Summers for relentlessly shilling corporations.

I meant in America.

They do in my house, Chris.

How'd my response to you wind up posted atop your comment to which I was responding?

And do you flay Bobby Flay for being a flayming asshole?

Bobby Flay is everything that's wrong with cooking in America, aside from fast food, I mean. Arrogance, pro-forma fussiness, lack of respect for tradition, premature osteoporosis of the creative bones. The chef as superstar instead of honest craftsman (for a country that hates France so much, we sure do buy into that whole aristos crap, even though we're cooking for Real Estate Barons and not the Sun King). The food business can give the used car business a run for the money.

As for Ray-Ray, I think "30 Minute Meals" is a great idea for a show, I just refuse to listen to anybody who doesn't know how to hold a knife, or a wineglass. And saying "baking is too much trouble" is like a pitcher saying he can't be bothered learning to throw a curveball because a fastball grip comes so naturally to him.

I'll defend Ray as well. We enjoy her unrelenting cheerfulness around here. My kids love her. And anyone who can get me to look forward to cooking, which she did with her latest cookbook, is doing something right.