The News from Indiana 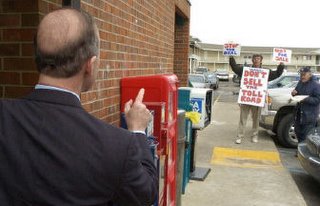 Wee Willie Comb-Over Either Debating a Toll-Road Protester From a Block Away,
or Using Archaic Hand Gestures in an Attempt to Sell Him a Lid

First, thanks to two hard-working Indiana blogs: taking down words, from whom I swiped the Fort Wayne Journal Gazette photo above, and Doug at Masson's Blog, from whom I'm about the swipe an excellent overview of the Indiana Toll Road Shenanigans.

• Our Boy Mitch has taken his 39% approval rating on the road to try to sell his lipsticked, rouged, and mascara'ed pig of a 75-year lease sale of the Toll Road in exchange for enough cash up front for him to finance his highway building games, followed by 65 years of squat. The bill giving him the right to do what he's already decided to do passed the House on a straight party-line vote, after the liberal (pardon the expression) application of pork grease to hesitant northerners, whose constituents will bear the brunt of the unchecked toll increases over the next four generations, or at least until they all get their atomic flying cars, and the threat to southerners to blow up the proposed Ohio River bridge the legislation also gives him the right to auction off--this time with no further oversight.

The public is opposed, the people in the north are practically in open rebellion, and a lot of the stuff Mitch has been telling us the lease requires--like spending on maintenance--aren't actually found in the contract. As promised, Doug provides the overview:

This whole process has been bass ackward. Solicitation for bids first, followed by a request for authority to do what they requested bids for, with the whole process done in secret. Meanwhile, the Governor has misrepresented what the terms of the proposed lease actually are (no requirement specifying at least $4.4 billion in maintenance, no enforcement mechanism for maintenance standards, only a 90% Buy Indiana “goal” rather than a requirement.) All of this the Governor is trying to ram through the legislature with heavy pork for waivering Republicans in affected counties.

The legislation also provides that the losing bids won't be revealed until after the deal is inked, which apparently violates Indiana law, but lives up to the promise of running the state like a business. Oh, and Mitch and his glee club get all cranky an' stuff if you happen to call the deal a sale--though why you shouldn't refer to something that way when it gives up property no one old enough to read about now will be alive to see returned--but it seems the contract actually refers to the process as a sale at least once--so the winning bidder can collect tax incentives.

Story assignment for some intrepid Old Media investigative reporter: what country are all these guys planning to move to when the whole thing goes South? Texas?

These Olympics are simply not providing the entertainment fodder they're supposed to--this blog may, on occasion, cast a peripheral glance at the odd Matador costume or tasteful naked curling babe calendar, but entertainment requires either more or less continual subject matter of pleasing aspect or a sustained level of corporate analingus sufficient to raise my blood pressure. Not enough of either from NBC, which continues taking backward baby steps away from the worst excesses of the Olympics as metaphorical display of the inherent superiority of all things United Statesian of the past twenty years, but it might be nice if they found something to replace the lost jingoism besides Mountain Dew Sports.

But Riley, I hear you butting, isn't this the Indiana news? Well, right you are, and I found an out: it's this recent "email from Tourin" from the Indy Star's sports editor Bob Kravitz, a man I sometimes enjoy despite not having agreed with a word he's written in over a decade. Here 'tis:

A lot of the old-timers dismiss the moguls, aerials and snowboard events as a bunch of U.S.-inspired, TV-driven trash sports. But I'm telling you now, this is the future of the Olympics.

First, I'm relieved to know that the U.S.-inspired, TV-driven comma trash sports now carry Bob's imprimatur, since this means that my suspicion they'll be an embarrassment by 2014 is on the right track. But for now I'll just say this: they got fucking pounded in the ratings by American Idol. Shred some a' that, dude.

• HB 1009 seeks to legalize all fireworks in Indiana except what's prohibited by Federal law (M80s and the like). This will "correct" the "hypocrisy" of current Indiana "law" which, after several years of "lobbying" involving a number of "dead Presidents" currently permits fireworks sales, but "bans" their use except by licensed pyrotechnicians or in specially designated areas. As you can imagine, compliance with those restrictions has been less than total.

The measure creates a 4% surcharge, part of which will go to fire departments for "training". This has prompted the state Fire Marshal to decide he's "okay" with the new law, though he'd really rather fireworks be banned outright. Got that? There's a certain level of tax incentive which will convince the state's top firefighting officer that giving 9-year-olds the "freedom" to handle incendiary devices that shoot 200 feet in the air is an okey-dokey compromise between two reasonably held positions. Thanks for your imput.

Assuming the fireworks industry already has the graft requirements of the Indiana Senate worked out, it's probably a good time to announce that this blog will cease to exist on July 5, 2006, after I'm arrested for murdering the guy across the street.
Email ThisBlogThis!Share to TwitterShare to FacebookShare to Pinterest

doghouse, great comment over at tbogg's place about marshall wittman and the bull(shit)moose shit.

I couldn't believe the 75 year lease BS of the toll road... I can't wait till he comes up north here to talk... they just LOVE him in St. Joe County.

You have my sympathy. It's a wonderful time we live in where a White House Budget Director can be off by a thousand percent and several hundred billion dollars estimating the cost of a war and still win a governorship, if not a Medal of Freedom. Now you reap the benefits.

In the Peoples' Republic of New York where I dwell, our governor just underwent an emergency appendectomy. While rummaging around his intestines, they found two grapefruit seeds, a bazooka comic, and the testicles of the state legislature. (They didn't ask for them back.)

I will have to take you out to dinner next time I find myself in Indiana, which admittedly isn't often. (In fact, seldom enough that you may wish to continue eating on your own.) But I'd enjoy seeing you get snarked up in perosn.