Trust Me, It Really Does Help if You Just Think of the United States Senate as the Fun-Filled Midway of the Bush Administration Carnival 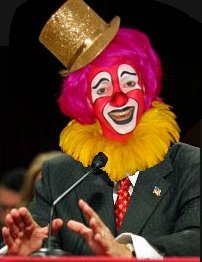 A little Song, a little Dance,
A little Smoke blown up your pants...

• Since the Committee Chairman has such broad discretionary powers, wouldn't it have been the smarter play to swear Gonzales in, but not plug in his mike? Does it matter? Why not just let him answer in a language he makes up on the spot? Or have the President declare that perjury is "okey-dokey" under the broad powers granted him by the Authorization for Use of Military Force, Pub. L. No. 107-40, 115 Stat. 224 (Sept. 18, 2001), hereafter known as "AUMF"?

• I know, millions of gallons of ink get spilled in a futile effort to figure out how Democrats let the Bush administration off the hook time and time again. But why doesn't anybody ask how Republicans bring themselves to vote for the guy?

• Remember back in the day, when George W. Bush pledged to get to the bottom of the Plame affair? The simple joy of having him lie to you outright about obeying the law, instead of saying, "Yeah, so what?" Those were great times, weren't they?

• How is Arlen Specter still a Senator?

But the real excitement for me was the actual use of the actual trial balloon (I wasn't sure they'd do it) from a couple weeks ago--that George Washington set the precedent for wiretapping during the American Revolution! Yes, George Washington, who was at the time not only Not President, but was the Commander-in-Chief of the American forces, and a British subject, in rebellion, and operating under no actual governmental code until the last two years of the war, presciently established a Constitutional precedent.

Because, dude, Washington grew hemp! So it's legal now, right?

• The other Whack-a-Mole moment came at the State Department, where spokesman Sean McCormack had to dance on the wire for a moment:

QUESTION: I mean, is there anything that you can do to support countries like Denmark that are facing these acts of violence?

MR. MCCORMACK: Well, we put -- the White House put out a statement over the weekend talking about our support for the Danish Prime Minister and the statements that he has made on the subject. Secretary Rice has also spoken with the Danish and Norwegian foreign ministers over the weekend in the wake of the attacks on their embassy as well. What we can do is to speak out very clearly in support of freedom of expression, freedom of the press, and urge understanding and tolerance, tolerance not violence. And I think that is what you're hearing from many quarters around the world concerning this issue.

You forget, we're exporting freedom and there's only so much to go around.

Well, they don't have to worry about respecting freedom of the press at home because most "news" departments of major media outlets blithely repeat Republican talking points as fact.

I like the made up language on the spot idea—with no translation, because it wouldn't matter anyway. Kind of like when Mel Gibson wanted to originally release his Snuff Christ film in Aramaic without the subtitles.

Don't worry, the lying-his-ass-off George W. Bush is but a press conference question away. Meanwhile, we can enjoy the sheer idiocy of his "We're listenin' in to Al Kyda to protekamerka" schtick. It's like living in a malevolent cartoon world. I endured Nixon, Ford, and Reagan, but I still never thought we could get this stupid.


• How is Arlen Specter still a Senator?

Inertian among the PA electorate. They just don't bother voting for whoever is running against him.