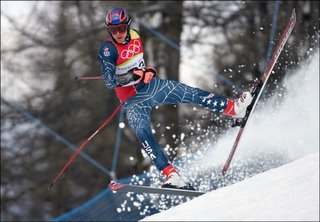 Miller, the defending world champion, a pre-Olympic news media star and a medal contender in five events, made it 0 for 3 Saturday when he slammed into a gate in the men's super-G, then teetered off the course like a weekend novice looking for somewhere soft to fall.

I'm not a skier, basically for the same reason I'm neither a yachtsman nor a polo player: I wasn't born anywhere near where those things are a part of everyday life, and my family isn't filthy rich. But of those three, skiing is the one I do watch on television, year in year out, not just when the Olympics tell me to. And Miller's recovery from hitting that gate--not with his skis, but with his face--looked like a thing of beauty to me. It knocked him onto one ski. He kept in solid contact on that ski as he gradually brought the other one around. A weekend novice would have been in the trees. So too, I think, would roughly 90% of World Cup skiers.

Then there's Kravitz. The Star sends him to the Games every two years, presumably for the change in buffet:

For most of these Olympics, the Americans have not only underachieved, but revealed themselves as a bunch of candy-pants, New Age, everybody-is-a-winner softies who are just happy to participate.

Bode Miller, who is now oh-for-3 after getting disqualified in Saturday's super-G. The clown prince of these Games recently said, "At least I don't have to go (all the way into Turin) for the medal ceremony.''

Snowboarder Lindsey Jacobellis, who blew a gold medal by hot-dogging and then falling just yards from the finish line. Think she isn't a product of the look-at-me, ESPN Play of the Day culture? Her act should be required viewing for every young athlete.

Figure skater Johnny Weir, who imploded in the long program, then cited bad biorhythms, lousy auras and a late bus.

Skier Steven Nyman, who gave us the famous, "Medals -- screw medals,'' then was last among those who finished the super-G.

All of them are sons and daughters of the Baby Boom generation. All of them brought up in a culture where everybody is a champion, and fifth-best is fine as long as you tried hard, and it really doesn't matter that Johnny's standardized test scores don't rate with kids in New Delhi. All of it, mush-headed nonsense, and part of the reason we've become a second-rate nation in so many areas.

Here's the thing: Kravitz is nowhere near that insane when he's home. Maybe someone dares him to eat snails at these things. Not that I don't disagree with 85% of what he has to say anyway, something that, if I'd have backed it up in Vegas over the last decade, would have bought me my own yacht and one for my polo ponies. But send him to the Olympics and he starts channelling Curt Gowdy. (Of the international uproar occasioned by the Salt Lake City opening ceremonies, a tradition-smashing celebration of John Wayne's America as told by a group of Disney designers held in a pure oxygen environment, Kravitz replied, "The world can kiss my Red, White, and Blue ass.")

And here's the funny part: this comes about in an easy (now) defense of Shani Davis, the first black athlete to win individual Gold in the Winter Games, in part, perhaps, because of his controversial decision to refuse to skate in the pursuit in order to concentrate on his own plan:

Well, thank heavens for Shani Davis. Thank heavens somebody out here understood that for three years and 364 days a year, we pay no attention to most of these sports, and if you want to make a splash, you have to make it on the one day we truly care. Thank heavens one American chased the gold medal like it was the single greatest pursuit of his life.
If he's a selfish lout and a lousy teammate, well, the U.S. could use a bunch more just like him.

Apparently the Ouija board connection to Gowdy was broken before the last two paragraphs. Good thing Davis didn't fall in the 1000 meters or he'd be the #2 dog on the anti-American checklist. And good thing he had the sense to wait until 2006 to take Gold, or we'd have heard about what a credit he is to his race, just after we lynched him for his selfishness.

Let's review. There was much chatter, most of it coming from the people who pay no attention to these sports for three years and 364 days of the fourth, that the U.S. men's team was in line for a serious medal haul. And that chatter was the result of one man: Bode Miller, the reigning World Cup champion, not that 99% of the chatterers could have picked him out of a lineup last year or told you which particular World Cup he had possession of. And Miller, after being the fastest man through the Downhill practice runs, finishes fifth after conditions changed and the U.S. team changed skis. The whole team went slower. Nobody used that as an excuse.

Then Miller leads after the downhill portion of the combined before hitting a gate in the slalom, which is his weakest event and which everybody on earth knew was the part that might deny him a medal.

Finally, in the Super G he cuts a gate a fraction too close at 60 mph, in part because he was taking a faster line than any other competitor, and has the misfortune of being whacked by the flag.

These guys are supposed to be sportswriters. They're sportswriters because, like most of us, they're failed athletes. But unlike most of us, the get to sit at court level, or at ringside, and talk to world-class athletes on a daily basis. You'd imagine there was some appreciation for the difficulty of the thing, if nothing else, for the fraction of inches between success and failure, for the fact that no one, not Gretsky, not MJ, not Tiger, is unbeatable. You'd imagine they'd run into a fair share of flakes. You'd think, especially, that the sports editor of the Indianapolis Star might be familiar with one Robert Montgomery Knight, a man who teaches that you play against the game, not the scoreboard. (For those of you who might not follow sports too closely, Bobby Knight is not exactly a fuzzy-minded "here's your ribbon for trying" sort of fellow.)

Pshaw. Two days ago Kravitz told us (in between the requisite complaints about his quarters and the long bus rides) that the X-games stuff was the future of the Winter Olympics he doesn't care about. Presumably that has something to do with the attraction of the Skater ethos he just slammed as what's wrong with America.

What's wrong with America! Christ on a Cracker, this is America. Our television money bought the very sort of Olympics we wanted: professional athletes, sponsored by major corporations, so they could be turned into Red, White, and Blue shoe and credit card pitchmen. Bode Miller makes no secret of his disgust at the Fame part of the equation. He's out on the hustings because that's required of him. Johnny Weir is a world-class figure skater who's also a flake who gets microphones shoved at him. God bless 'em. Neither of them shot a man in the face last week.
Email ThisBlogThis!Share to TwitterShare to FacebookShare to Pinterest

I am virtually applauding your column! Where's the whining from such home-grown putzes when a different athlete, say a foreigner, extends too much and fails? Oh, that's finally sportsmanship? Nonsense. You feed the team publicity circus food and then get dismayed at their perceived lack of requisite enthusiasm? Nice try, hack. I mean, really, take a look at the clock in these things? Do you realize how fast a 0.1 seconds goes? I watch the Olympics, sound off, just to marvel at how advanced all of the athletes perform.

btw, doghouse, curt gowdy died today. i heard it over the radio.

gowdy who said of wes parker, former first baseman for the dodgers, that parker was originally born in chicago.

at least kravitz has dropped this annoying mannerism he used to do in his column.

a load of malarky.

Slightly OT, doghouse, but when did we start calling it "Torino" rather than "Turin", as in "Shroud of"? To me, "Torino" refers to a fat-assed Ford from 1971.

Do we now have to start saying "Roma" and "Napoli"? Can you imagine Americans trying to get their lips around "Fiorenza" (which actually is more fun to say than "Florence")?

It all just makes me hate Katie and Matt even more than I already did.

I thought that Lindsay was gracious in her loss of the Gold. She said that she was having fun because that's what snowboarding is about and she won the silver. I guess Kravitz'll go with the standard: It's all about the glory of competition column next time. There are, after all, only a few Olympic columns a person can write. It's a law or something they put in the water.

Oh, I forgot. Do you love, love, love that camera trick that lets them replay two skiers on the course at once? I think it's the most amazing thing in the whole world EVER. EVER.

I've already confessed to not paying a lot of attention to sports. Period. That has not kept me from becoming enamoured by the two anti-heros, Bode Miller and Johnny Weir. Can we have two less similar people? Yet I adore both of them for the exact same reason: their failure to fit someone else's pattern.

Great column. I didn't mean to read it, because I'm not all that interested in what sportswriters are saying about the Olympics, but I started and couldn't stop. Great, great stuff.