The Blackwater T-Shirt Is A Nice Touch, Though 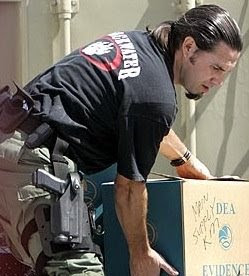 Like I always say, never sell to a man with a soul patch and an Uzi belted to his leg.  Unless you're selling Rush tickets.
UPDATE:

Riley replies:
1) I actually considered putting a disclaimer up there to begin with, but I decided to let it go. 2) Generally speaking, "Uzi" is funny; "Glock" is not. 3) Riley has little if any use for gun culture, but knows enough about weapons not to have blown his fucking hand off. 4) Correctly identifying the weapon in question would have made him sound at least minimally knowledgeable, a condition to be avoided on several counts.  5) His eyesight has always been bad, but it's not that bad, yet. 6) The joke, such as it is, rests (or wobbles) on the three points of what a carnival pitchman might call his tripes:  a) that it is something I always say, making "Uzi" the appropriate period reference, and "Glock" an anachronism; b) that that great honking velcro holster contraption makes the man look like he strapped on a fucking howitzer in order to do battle with some aging hippies.  With glaucoma, no less; and c) the always risible dichotomy between the hipster accoutrements of the undercover cop and the ultimate display of the true cop mentality, wherein the frisson of the suggestion that one would attempt to make a "Buy", as they say on the street, of a little harmless weed while displaying a shoulder-launched anti-tank weapon on one's hip plays against the real-life frisson that, at least in retrospect, the soul patch is no less of a giveaway.  7) Similarly, I might have ignored the weapon altogether and said something like, "It proves the old adage, 'Never sell weed to that guy from Extreme who fronted Van Halen for six weeks", but, really, it's probably wisest at my age that I avoid cultural references altogether.  Rush was a leap.
SECOND THOUGHT:  If anyone wants to put up the money, I'll bet "DEA Evidence" boxes would be a big Xmas item in certain markets.

Labels: Comedy/Gravity
Email ThisBlogThis!Share to TwitterShare to FacebookShare to Pinterest

During the height of the Blackwater bruhaha, I went paintballing some friends. We were all glad the guy with the Blackwater shirt was on our side. Anyone willing to wear a shirt like that is making a strong statement.

Anyone in Dogworld know where I can get me one o them Blackwater tees? Used, mo bettah.

Anyone in Dogworld know where I can get me one o them Blackwater tees? Used, mo bettah.

I'd like to know whether Blackwater was actually being subbed out to do this rediculous bust. It's always seemed like Blackwater was a private brown shirt organization just waiting for the next step. --Beel

Where did you get that picture?

You can tell Anonymous that the Blackwater Website has a "Proshop," and that they sell T-Shirts. These are strange times in which we live.

Don't you find it discomfitting that your readers know the difference?

The DEA is claiming that the agent was a DEA agent and not employed by Blackwater.

The photo came from the LA Times web site before it was pulled.

And the T-Shirts sold in the Pro-Shop look nothing like the shirt this guy is wearing.

Looks
the same to me

James, you are blind!

The shirt the guy in the photo has on has an official Blackwater logo with the "BLACKWATER" on top and the t-shirts in the pro shop have the words "BLACKWATER" on the bottom and in a different font.

In fact, nothing they sell has the logo as seen on the back of the shirts that employees of the company wear, specifically so that those who know wont confuse a company man with some chump with bad eyes wearing a t-shirt he bought to look cool in.

Thanks Todd, I'll get my bifocals checked. You are correct.

Thanx for all you guys help in my New Quest. But dang! Looks like I'll have to lurk in this guy's laundromat if I want the authentic T. My keepers, they won't let me go to Iraq, but a laundromat hang may just be doable, if I stay especially quiet.

Whether its a dea agent or a blackwater op what does it matter? They both put there lives at risk for this country whether getting drugs off the streets, or fighting in a war. Our military is made up of young kids who all dont want to be there where blackwater is made up of Highly trained ex military who are there for the same purpose.They are not mercenarys but private contractors that our goverment can use in the war on terror to do things that our military cant cause of all the crying liberals and the red tape involved in this war.