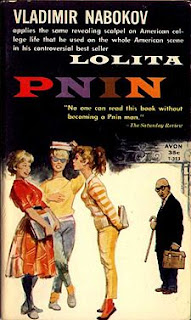 FOR reasons now lost--I've slept since then--I recently had the occasion to wiki up Pnin, and discovered the vintage cover above, which is, I suppose, laughable in its shamelessness, if that's the sort of thing you laugh about. I tend, even at my most agreeable, whenever that is, to view it as a serious argument for increased regulation of commerce, and, at most times--such as now, when Power Company surrogates are busy mutilating trees in my neighborhood, a necessary evil whose necessity seems less important to them than the opportunity to inflict mischief in the name of their Dark Master--a point on the very short continuum that terminates--I think it terminates--in the joyful stockpiling of multi-stage nuclear weapons on the grounds that this effectively deters their use in a way their total absence never could, and the attendant notion that the Freest Nation on Earth should positively bristle with armaments of every other sort in pursuit of keeping the world free of anybody else who might. It's been a while, but I don't recall there being three coeds total in Pnin, or any who, in 1953, dressed like Sandra Dee circa 1958.

[While I'm thinking about it--it must be the chainsaws--Somerby catches Keith Olbermann repeating Bob Herbert's pathetic Leaning Tower of Throbbing African Manhood remarks twelve hours, and several debunkings, later. Why is it you prefer to be lied to by "liberals"?]

Anyway, Senator Obama came to Northern Indiana yesterday, and strolled around with our congenitally disingenuous junior Senator, which leads even the New York Times to mush up its peas and hide them under the mashed potatoes:

The reasons for Mr. Bayh’s apparent presence in the inner circle of potential ticketmates are varied, and they say something about the nature of the 2008 race and the correlation of forces within the Democratic Party.
In contrast to Illinois, Mr. Obama’s home state, neighboring Indiana has not supported a Democrat for president since 1964, when it was part of President Lyndon B. Johnson’s landslide victory. But in this election, it is considered a battleground state. Many Republicans crossed over to vote Democratic in the May 2 primary, and there is some thought that putting Mr. Bayh on the ticket just might be enough to make this red state and its 11 electoral votes turn blue.
During the primary campaign, Mr. Bayh, 52, not only supported Senator Hillary Rodham Clinton, he was also one of her national campaign co-chairmen and described her in an advertisement as having “a spine of steel.” But his roots and popularity in Indiana run deep. His father, Birch Bayh, served three terms in the United States Senate (losing in 1980 to Dan Quayle, the last Indiana native to serve as vice president). And Evan Bayh served two terms as governor of Indiana before being elected to the Senate in 1998.

So you may think you can imagine what our local "news" coverage was like. But I doubt it. To begin with, these are the same wig mannequins who were still squirming in their anchor seats about Indiana's historic primary! weeks after it became clear that as a result of Your Vote Counting This Time! our selection lost. This actually went on until a mid-July Miley Cyrus sighting effectively altered the news cycle. The artificial excitement generated by rumors of a place on the VP Short List (there's a Presidential election, sometimes worthy of the name, every four fucking years. Don't you people pay attention?) has been treated as though it reflects honor upon the entire state, and especially its dedicated crew of Potential Thirty-Second Home Town interviewers. Which means that the "Event" was treated almost exactly as would rumors of a real-life Hannah Montana romance, with lots of gauging the sincerity of back pats and measuring pupil dilation during eye contact. Wherever it was my Poor Wife stopped during the proceedings the reporter informed us that Obama had used Bayh's name twice! Once in the introduction! and again when he praised the confounding issue of Indiana's last, fearless, Democratic Senator for his work in limiting Loose Nukes, raising the question of whether The Candidate had confused him with Dick Lugar.
What in the world can possibly be interesting about this stuff, and why does it have to be covered by a bunch of sugar-buzzed youngsters who can't wait for Santa? It's like the quadrennial thrall of Swimming, or Speed Skating, but absent any bursts of excitement in the real event. Evan Bayh is the most worst of Indiana's two Senators, and the other one is an octogenarian Republican Eagle Scout who's spent thirty-five years in Washington working on his Foreign Policy badge. Bayh got elected on the strength of his father's name (one of the most accomplished legislators from Indiana in its 192-year history, and the man who lost to Dan Quayle. Democracy simply does not work.) and immediately turned into the Younger, Handsomer, Slightly More Aware of His Surroundings Ronald Reagan. Tax Cuts! Workfare!  At least Reagan left his party more energized than he found it.  Bayh left the Indiana Democratic party right where he found it:  nowhere.  You think McCain performed a cynical obeisance to Bush for the sake of his Presidential aspirations? Bayh's like a television suitor of Flavor Flav; there's not enough There there for cynicism to find a toe hold.  (If it's ever discovered he's been in the pocket of Big Anything the only wonder will be what they imagined they were paying for.) Aspiration shapes the man like helium shapes a balloon. Not just an Iraq War vote, he was a fucking podium invitee when Bush signed the thing. Four solid votes with the Acting President on FISA. And I saw, more than once yesterday, someone suggesting that a strike against Bayh (why is he being considered for anything other than Tar & Feathers?) was that Democrats would lose his seat, thus endangering their mastery of the United States Senate. As though that were a bad thing. Hey kid, wanna buy a dirty book?

Could be worse; at least this is rooted in something that might be vaguely important.... round here, not only is all the Hair talking about Brett Favre's inability to make a decision or stick to it (Double Bonus!! It's both News AND Sports!!! leaving Snow Predictions as the only other thing taking up teevee news) But they also are providing Special!! Reports!!! daily during other programming, increasing the percentages of Brett Talk to unforeseen levels.

Will it stop now and move to New York? We can hope, but I'm not counting on it. There are Brettrospectives still to rehash, and more in the pipeline!!

The reasons for Mr. Bayh’s apparent presence in the inner circle of potential ticketmates are varied....