"We are not going to distribute footage. We are not doing these kinds of things. Everything is good. What are you going to do with the footage? See what the Serbians already saw? It is clarified for us beyond any doubt.

“He’s the winner in any way. He’s the winner no doubt. Even if you could see the pictures, I don’t know how you could use them."
-actual comments of Cornel Marculescu, actual executive director of the international swimming federation FINA, explaining why actual underwater photographs of Michael Phelps' .01 second victory in the 100m butterfly would not actually be released as actually announced earlier 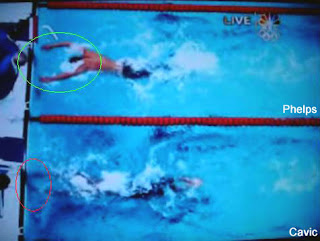 FOR one thing, we need seriously to consider not only whether "Conspiracy Theorist" should, in The Age of Bush (Clinton=blow jobs!), still be considered a mild-to-medium slur, or whether, in fact, the presumption should not now be reversed, and we assume anyone not wearing a tinfoil hat is harboring secrets which would Blow various Lids off various Things now safely Lidded. I don't like this turn of events any more than you do, even though I've pretty much always avoided hurling charges of home-made radio-wave-repellant headgear usage on general principles.  Paranoia is overrated.

And even though, to be clear about it, I'm not exactly convinced one way or t'other about that 100 butterfly decision. My personal concerns could be summed up as follows: 1) how has dishonesty become so profitable--mainstream profitable--that risking the appearance of dishonesty, even in a situation where honesty would seem to be central, crucial, the Without Which Nothing, is practically automatic? and 2) why is it that Americans always seem to be in the middle of this?

I mean, in 2008 is there any reason a sane person would chose "Believe FINA" as the default? In 2008 should we be looking for some reason other than the obvious one for such an institution giving us an argument instead of information?

True stories (we accept no advertising!): 1) I watched a replay of the race with my Poor Wife, the former competitive swimmer and high school swim coach. I am, by nature, a man who suspects that Stories Too Good To Be True may, in fact, suffer the occasional embellishment, and I have just enough of a grasp of mathematics to feel reasonably sure that 1/100 sec. is not, technically, a feasible margin of error given the circumstances of athletic competition, even one so well funded. So when I heard Phelps had won by 0.01 I suspected, not chicanery, but the pretension of precision beyond the likely. Then we watched the replay, and I said, "Hell, he won.  Close but no question." And then they showed the touch-out again, and I realized I had the lanes mixed up. The guy I thought had won, close but not 1/10 of an eyelash batting, was Milorad Cavic. 2) Later, in an effort to apply the same exacting empirical standards that make the NBC Nightly News with Brian Williams the global standard for professional journalism, the studio peacocks showed us underwater footage said to "prove" Phelps' touch-out, except the damned thing looked like a Ben Turpin two-reeler being hand-cranked by a spastic. They showed it over and over again, and each time I kept expecting the jump from about .35 meter out to their resting positions to disappear, but it never did. 3) The accompanying expert testimony, from the Golden Olympian Ambrose Gaines IV ("Rowdy")--who in a post-race interview once compared one of his own Olympic victories to the emotions generated in the residents of Hooville by the satisfying conclusion of How the Grinch Who Stole Christmas--noted that Cavic pulled his head up at the finish (a technical faux-pas) while Phelps employed a half-stroke (another technical faux-pas, but subsumed here as "risky", since it "worked"). My Poor Wife concurred. 4) I bow to their expertise, but I still question long-term exposure to chlorine; none of it meant we'd actually seen who touched first. 5) Meanwhile, the Indianapolis Racist Star's Bob Kravitz pens a column about Women's Gymnastics Outrage #4 or 5, the one where a tie on the Monkey Bars, or the High Beam, or some such was determined according to the rules, thus possibly depriving a button-cute American of her right to endorse the Chevy Tahoe. One day earlier I'd happened to see (on a hench network; contact sports don't make it to the Big Show much) two boxing matches in a row decided by precisely the same system, but neither of them involved countries whose sense of moral superiority hinged on the outcome.
(By the way, I have a Solomonic, if I do say so m'self, solution to that But Chinese is exploiting young girls! outrage which robbed Béla Károli of his sleep last week--limit participation in Women's Gymnastics to women.  Of course, as a humanitarian, I favor first making sure you cannot open the windows of NBC's boardroom from the inside.)

This reminds me: I forgot to thank the folks at the Racist Star for directly appending the comments of their self-befouling microencephalic racist readership (and, if anything, I'm being nice) directly to the end of stories, instead of requiring one to click a link and wait two seconds before renewing one's hatred of one's fellow man. I'm sure that, like me, you can never get enough of "Your a moran", or suggestions that every non-white citizen of The Greatest Country in the World earns his living, between prison stints--where he is coddled by PC liberals--"pimpin his ho's" (funny how the missing apostrophes always turn up somewhere). And no, these are not, in the main, trolls, and no, you really should not go find out for yourself. Kravitz, naturally, wrote a column about how there couldn't possibly be any argument with the apodactic observation that Michael Phelps was The Greatest Olympian There Could Ever Be, and--I had no choice but to see--a mild admonishment by a time-wasting sports fan that, seeing as how Swimming hands out Olympic medals the way public clinics hand out condoms, maybe we ought to try to achieve something approaching Perspective was met with accusations that the writer must really hate America.

And I was replaying this, ad nauseam, for my Poor Wife last night--she either has the patience of Job or is hiding profound deafness--and I mentioned that the Nixon administration had spawned John Dean, John Sirica, Archibald Cox, and John Ruckelshaus, while the intervening forty years have not only given us...Nobody, but people were now obligated to apologize to rich people who shoot them in the face. And this, Dear Reader, is the Deformed Amphibian Epidemic of the American soul.

Thank god for you, Mr. Riley. Maybe if enough of us lonely voices crying out in the wilderness could somehow get the message out...

Preview of the McCain miracle coming to a TV screen near you in November.

Since the touch sensors are allegedly scientifically calibrated and validated, I don't worry too much about its decision. Or do you know something I don't (e.g., Diebold was the vendor)? 1/100 sec is no problem for electronics; I can't speak about the mechanics of the sensors.

Technology is a great thing, but its misuse can be disturbing, like how the camera operators just love doing extreme close-ups of the Most Awesomest Wingspaniest World-Record Lid-blowiest Olympian Evar as He mouths the words during the play of one of the most irritating renditions of our national anthem.

Why is America seemingly in the middle of these things? For your particular example, America wasn't in the center lane (lane 4, at least), which might explain why you got the lanes mixed up... Anyway, if it makes you feel any better, and since you mentioned boxing, the Korea olympics boxing controversies were IRC equal-nation-opportunity screwups.

What if your button-cute American is really a (naturalized?) button-cute Soviet? Would she (had she won) have the right to endorse a Tatra?

But then what do I know? It wasn't for a whole week, until NBC showed its gymnastics announcers/play-by-playists, that that guy wasn't John Tesh.

Were all ho's now.

Well, I tried to leave this message before, but screwed up a link, so I deleted the message:

Aw, come on DR, we're into track and field now. You should be enjoying this stuff.

The Chevy Tahoe remark was, however, as usual, laugh-out-loud funny.

Drowned in the Phelpsian racket was the 0.01 second loss by Dara Torres. Which was a plain shame, since a gold medal for a woman who has been an Olympic competitor longer than most of her current competition has been alive would have been awesome.

I'm still unable to completely resolve the gross/funny dichotomy raised when John Stewart referred to Torres as renting her abdomen as a "meat xylophone".

Insane Bolt, his antics aside, is pretty exciting and considering his results, worth watching. Tell me you can find some enjoyment.

Well, speaking as an Australian -

... actually, I should probably stop there.