If We Can Threaten To Put Another Man On The Moon, Why Can't We Make Self-Anihilating Rhetoric Than Really Self-Anihilates? 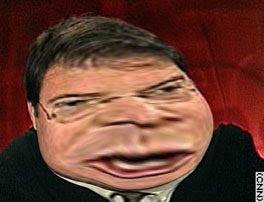 AND Welcome Back, s.z. The Low-Hanging Pantload, via Scott:

Now, of course, this is a bit unfair in that Obama had planned his no doubt well-deserved vacation for a very long time. But presidential vacations are always well planned -- and often interrupted.

It's a new fucking world record in Stupid every time the man enters the pool! And, obviously, he doesn't even train. Maybe NASA developed a suit that prevents oxygen from getting to the brain. Although, if you look back, there's not much evidence his brain got much exercise in whatever era. Maybe they've discovered a way to wrap his body around an 8-year-old Chinese gymnast. (The physics would have been a snap.) Y'know, the supposed imperturbable fearlessness of the clueless? I'm pretty sure it's not performance-depressing drugs. I know a thing or two about those, and none of them can make you that stupid; it's a Hollywood myth. Still, drug testing for pundits: it couldn't hurt.

The remarkable thing about Goldberg is that he's sui-generis while remaining the very epitome of Triteness; though we shall find some, it doesn't require any context for us to appreciate the speed with which he burrows for the Gold here: a) Obama has been "trying to look Presidential" on the campaign trail (which, in Goldbergese, is an "odd strategy" for someone running for President. You figure it out); b) the Sovi Russians did something which he gets to claim as sparking a global crisis, on the basis of his inability to make distinctions or recognize proportions when necessary, and often when not; c) therefore, Obama should have cut his vacation short.

And gone where? And done what?

And in furtherance of your claim that he's trying to look Presidential. Jesus, not even I imagine the Obama campaign to be that incompetent.

But we are nothing if not time wasters here, provided it doesn't feel too much like work, so let's google "Goldberg Bush vacation" and see what the first link brings us, shall we?

This has been the not-too-subtle theme of the hundreds of stories about President Bush spending "too much," "a lot" or a "record-breaking amount" of time on his ranch in Texas. Dozens of news outlets have pointed out that Bush's vacation ties Richard Nixon's 30-day record for longest presidential respite. Of course, by heading back to Washington on the Friday before Labor Day instead of the following Monday, Bush is managing to avoid breaking the record after all.

Still, I wish he'd stuck it out. By going back to Washington early, Bush is surrendering to the psychological demands of the permanent government, particularly the press corps. There's a reigning mythology in the nation's capital that America is "driven" by the president, and when he's not at the wheel the whole country might smash into a light pole or a slow-moving cow.

Of course, in Goldberg's defense, 9/11 did change everything.  Especially the jocular view of that particular vacation.

Y'know, I've been watching this "Conservatism" scam for a long time now, and even at a young age I was aware of a goodly portion of what my Sunday School teachers called "hypocrisy", that mid-20th century theological concept now fallen out of favor. So that I was hardly surprised when Ronald Wilson "National Debt" Reagan quadrupled the federal deficit, or when he raised taxes and called it "revenue enhancement"; the salient point about Reagan, and Buckley, was not that they were public scoundrels, but that they got away with pretending not to be. And still one wonders how "movement" "Conservatism" could have gotten Here from There. There is, after all, still some gap between taking pride in concocting simplistic, bumper-sticker answers to complex problems and being too frat-boy Stupid and Proud of It to be troubled by intellectual honesty.
Labels: English. It Makes A Poor Cudgel.
Email ThisBlogThis!Share to TwitterShare to FacebookShare to Pinterest

It could be the 12-hour time difference. You know, where night is day and day is night (or more plainly, black is white and white is black).

I rather think it's something different: the few neurons that are out protesting for freedom for all neurons are quickly rounded up, the tubes that get data in from the outside world are blocked, and the dingy areas of his mind are Potemkinized.

You'd think the reduction in airborne Cheetos dust would have helped him to think slightly less mirkily, but it just allows the stoopid to increase geometrically. Maybe Cheetos is the performance-depressing drug of which you speak.

Right on target as usual. It's always amazed me just how transparently bogus the "Conservatism" scam has always been, and yet folks bought the goods and still do. It's as if there are masses of people for whom Lionel Barrymore is the hero in those Capra movies. All the more remarkable since you didn't have to be Vance Packard, either—the hypocrisy and bullshit of the Reagan crew was manifest and in your face. It speaks volumes about our present benighted era that a tool like Goldberg has a column in any newspaper, and I say this as one who watched the NY Post plummet from Breslin, Hamill and Kempton to the likes of Jerry Nachman, Steve Dunleavy, and "Dr." Martin Abend.

Four days late with a comment that no one, not even the esteemed D. Riley will read, but to go on:

Hypocrisy only works as an ethical concept, it seems to me, when and if it's accepted by a critical mass of observers that most of the behavior of the people under observation is reasonably right and moral, most of the time.

Once the idea got a firm foothold that All Politicians Are Immoral/There's No Such Thing as an Honorable Elected Public Servant Who Desires the Public Weal, somewhere in the lateish 70s that would have been, it left the door open for judging these people solely on the basis of fleeting persona, as presented by fleeting media impressions, not deeds. I honestly don't think that a man with Obama's lack of experience and accomplishments (leave out matters of skin tone just for the moment) could have gotten a major party nomination in, say, 1968.

Was the result better then? Uhhh - - well, more fact-based, anyway. Always desireable to be fact-based.