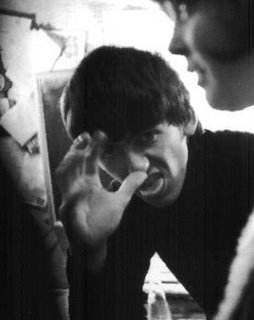 "You don't see many of these around any more, do you?"

Good a time as any to explain how the Fab Four turn up on my family's home movies.

The Beatles played Indianapolis on September 3, 1964, part of their second American tour. They were supposed to stay at the swankiest hotel in town, the Essex House, but word got out ahead of time and fans descended on the place, stealing doorknobs and ripping up wallpaper. They switched plans and stayed at the motel at the Track.

We had all sorts of connections there, including the manager of the motel, so it came to pass that on the morning of the 4th I was swimming in the pool directly underneath their rooms as they exited and walked over to the black stretch Caddy they used on that tour. No entourage.

The lodging switch had worked a charm; I was the only one there, besides my Mom, who was working my Uncle Floyd's camera. A couple minutes later I walked over and waved. Ringo waved back. The others ignored me. Then I went back to the pool. I'm a Hoosier. We don't pester.

They took them for a lap around the track before heading for the airport, and the guy who drove the tour van took me around behind them. That was my mother's idea; watching the back of their limo for 2-1/2 miles didn't really excite me much. And so for thirty-five years I told my story, concluding with, "Can you believe we're such hicks we drove The Beatles around the Track before they could leave?"

Then for Christmas 2000 I buy my wife, the Beatle idolator, The Beatles Anthology, and I'm reading about the '64 tour, and after mentioning meeting Fats Domino, George says:

"And Indianapolis was good. As we were leaving, on the way to the airport, they took us round the Indy circuit....It was fantastic."

So now I'm surprised he didn't mention how polite the crowd was.

George was always an insensitive ingrate. And by the way, I continue to bask in the glow of your reflected coolness, if that makes any sense.

damn, doghouse, whenever some fool of a hoosier gets all watery about the only time the beatles came to our fair state ... it's rather disgusting.

but you ... you have a personal connection, and that is wonderful.

i hope your guitar doesn't gently weep ... or weeps at all.

The aforementioned stretch caddy did not exist. I drove the Beatles while they were in Indy. The vehicles were new Oldsmobiles. We used two while they were there so we could lose WIFE radio at least part of the time. I was a Sgt on the Indiana State Police at the time. WKS

Funny story- My father-in-law (Dad) was a photo journalist for the Star/News. He was at the concert and took some great pictures. The really funny part is that his wife (my mother-in-law) was trying to find him at the fairgrounds and actually walked right by the Beatles! And to this day, she tells us how annoyed she was about the crowd and how she had no clue who they were! She actually (according to her) walked right next to them looking for Dad!!! I do, by the way, have a great one-of-a-kind picture that Dad took during the press conference. Can you imagine being in the same room as the Beatles and not really knowing who they were (as I'm sure there were many people in this category back then!)
thanks,
Chris