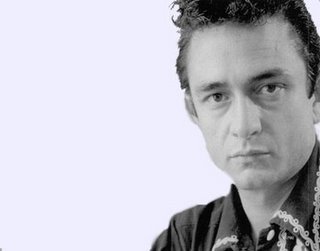 It's Brush With Greatness birthday weekend and I didn't even realize it I checked the new week's calendar. In the early 80s some friends of mine owned a restaurant. We were eating there one night and Andy came over to the table and sorta off-handedly asked if we'd like to meet Johnny Cash. He already knew the answer.

One of their patrons ran the summer series at the outdoor theater at Butler, and she had hired them to feed the acts. It was mostly Broadway road companies and middle-aged white bread singers and such, but about once a season they'd manage something good, and that year it was better than good, it was the Man in Black. (I hadn't known about it at the time because the schedule hadn't been released yet.)

So the night came--it was a Saturday, which was why Andy stayed behind and his wife came with us--and my wife and I put on chef's coats and hauled all the stuff backstage, and I fired up a grill and prepared to grill some strip steaks, having already been informed about six times that Mr. Cash's steak had to be burned.

They pulled up around twilight. I was outside watching the coals, and here they come. The Tennessee Three (no Carl Perkins, but still!) and their wives and nieces (okay, no nieces that I recall), then the diminutive June Carter, still striking, with those piercing eyes and high cheekbones, then the Man himself, in black.

Per instructions I started putting the steaks on, but I imagine my mouth was still hanging open as they filed past me to the backstage area, everybody but John saying, "Hi," or "Good evenin'," or "Don't those look good." I know it's a cliché to say some famous person or other was genuine, but these people were genuinely nice, not practiced-smile-for-the-little-people nice. It was like a church potluck dinner.

Everybody but John ate in the common room. June took his plate to him in his dressing room, and I was helping with the cleanup, figuring that was the end of it (I'd gotten to tell June how much I admired their work, and her songwriting, and that I was a fan of her daughter Carleen; it wasn't gushing because she was so gosh-darned nice) when Johnny walked in.

"That was a pretty good steak, young man," he said. (Thanks, I thought; if I'd burned it any more I would have just served you the charcoal.) I told him what a privilege it was, how my grandma gave me some of his 45s when I was five, and how much I missed his teevee show. "We did do some good ones," he said, and yelled something over to W S Holland. I started to get back to the cleanup, and I don't quite remember the segué, but thirty seconds later he launched into a story about trying to tackle a calf with diarrhea. In that voice.

We got seats for the show out of the deal, too.

Yeah, yeah, great story and all that. But have you realized what a lucky little bitch you can be sometimes? Or is there a deeper, darker secret to it all? And yes, I'm jealous.