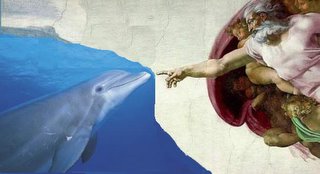 Could be a regular feature....

John Paul the Great has converted me, in a roundabout way, not to Roman Catholicism, but to making Peggers a weekly read. She's always been one of those rare delicacies I thought was best pre-digested by others. I'm not so sure that's wrong.

But then she turned up on the Colbert Report shilling her faux-peasant-girl mysticism (the Miracle of the Safety Glass!) meets middle-aged Catholic cafeteria worker (if I close my eyes, Vatican II ceases to exist!) premature hagiography of JP II (is there an ecclesiastical term for this? Womb saint?) and I had, well, not an epiphany, exactly. It was more like the feeling when you think a bird just shit on your hat.

Y'see, like many of you I've been perfectly happy to resign Peggy to permanent Crazy Dolphin Lady status, and given the circumstances which seemed to restrict the interview even more than most (you can poke a little fun at the Pontiff, just don't go tearing up his headshot) I wasn't expecting more than a couple of gags from the interview. But Colbert had prepared.

He led off with a little gag about her wordsmithing, praising her "It's great to be here" like it was a shiny new coin. He gave her a little flirt. She was beaming. Then he said, "You've written so beautifully for so many Presidents...could you start writing for this one?"

The smile vanished, and was replaced by the muscles from the cheekbones to the corners of the mouth that tighten when you discover the dog has pooped on the rug and you just stepped in it. It was a joy to behold. What emerged in that moment--and remained for the rest of the interview--wasn't the Crazy Dolphin Lady but the professional Republican apologist. And Colbert kept her off-guard almost to the end, before letting her up to plug her holy nonsense. "You took a two month leave of absence to work as an unpaid volunteer for the Bush campaign. Which accomplishment of the past year made you sit up and say, 'Gosh, it was worth it'?" Later he asked her, "Honestly, now, who won the Cold War--Reagan or John Paul II?"

As soon as the thing stopped taping I watched it again, twice. And I'm about halfway convinced now that Peggy is an act. She was just too quick to realize that Colbert had called her out in a way that was too subtle for loud disputation, and the professional veneer, though veneer it clearly was, kicked in immediately and completely. She didn't do the Malkin screech. Caught with a left hook early in the round she tried to hang on until the cobwebs cleared. A pro.

That's not to say her writing, or her thought processes, drip with lucidity. Here's Number Five from Peggy's year-end Top of the Pops:

[T]he rise and fall and comeback of President Bush. He was triumphant in November 2004, seemed lost in the months afterward, made strategic mistakes (Social Security), had bad luck (Katrina), made bad judgments (Harriet Miers). A fight not with his base as much as with the thinkers and leaders of his party ensued. Issues that had simmered (spending, immigration) ignited.

But history moves quickly. His people hit reset; he announced a refocus. The economy is an almost unnoticed triumph. Christmas spending is up 10%. Iraq votes yet again, amid pictures of purple fingers. Mr. Bush's numbers go up. He is dinged but not done. All will hinge on Iraq. History will say Bush was a dramatic and consequential president who broke through the wall of history and successfully reordered the most dangerous part of the world, or a dramatic and all-too-consequential president whose decisions yielded disaster. It's like looking at Woodrow Wilson in 1919 and wondering, How is this going to go?

I'm guessing pretty much the same: brutal federal military response to race riots and labor unrest, the imprisonment of Eugene Debs, another Red Scare, followed by a debilitating stroke and Laura runs things for the rest of his term. Then comes the Nobel Peace Prize, whitewashing by our history texts, and his place in the line of animatronic Presidents at Disney World. That what you have in mind, Peg?

So, the question is, do you have to be insane to know so little of the recent history of your own country or religion, or to gorge yourself on purple-fingered victories and two-decimal-point "comebacks"? Or is it possible that Peg's just pretty good at faking it? I hope 1920 will bring some answers.

UPDATE: Damn, I forgot to read the dingbat below the dingbat. 2006 predictions:

Katie Couric goes to the "CBS Evening News" and gets a talk show. Judy Miller becomes a columnist and blogger. She'll win a Pulitzer Prize, but not until 2016.

Okay, crazy. Forget I said anything.
Email ThisBlogThis!Share to TwitterShare to FacebookShare to Pinterest

Bush is the comeback kid. A mere 28 points or so behind Clinton after the impeachment fiasco. Nearly 9 out of 20 Americans can stand him.

Peggy's great at faking it. The Repubs have been awfully good to her. But I think she really is crazy. She is one of those people who thinks there's a grand narrative to history, and she will keep shaping events to suit that magical narrative.

I think she keeps an 8x10 glossy of Reagan underneath her pillow and kisses it before she goes to bed each night.

It was more like the feeling when you think a bird just shit on your hat.

So you're thinking, "Gross. But at least I was wearing a hat."

That's why I get all my wingnut input filtered through folks like you and the other Koufax-type blogs. BLTR is a damn fine hat.

That Debs paragraph was just plain levitation. Thank you for your brilliant prose.


I'll shut up before I start adulating.