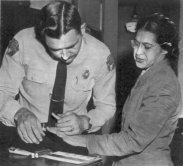 I was working on a piece for the anniversary for the last few days, and it kept getting longer and longer--an excerpt may be released as a new biography of Muhammed Ali next spring--until finally it was more or less un-editable and I left it in a folder with all the other such pieces. I thought it would be interesting to compare the story of a boy with my social security number growing up in an all-white town, going to an all-white church, seeing and hearing a lot of casual racism all around him as the civil rights movement took place in the newspapers, and how easy it was to pretend that racism was something happening elsewhere. Parts of it were written before Rosa Parks died and I was reminded of the anniversary, and I'll straighten it out sometime. I didn't want to simply post a picture, so I'll tell you the story of my tiny protest.

In 1967 my mother remarried after divorcing my father, and we moved into a house in a new school district. I didn't like my step-father, or even try to. He was a card-playing, beer-swilling, sit around the house aggrandizing the life of a regional sales manager and bitch about Ted Kennedy sort of guy. He wore plaid pants with white shoes and matching belt. He played some golf and cheated on his taxes. His idea of humor was catch phrases, of which he had about five dozen. My dad was a teetotalling sports nut with a sharp but softspoken, self-deprecating sense of humor. I was a sullen fourteen-year-old who'd been uprooted from all his friends.

That summer, instead of playing basketball all day and baseball in the evening, I found myself with my first job, which my stepfather had arranged. "To teach him the value of a dollar," was the standard explanation, but it really had to do with his conviction that a boy my age should be out choppin' cane. I noticed a few years later that nobody felt my sister needed to learn the value of a dollar. I went to work at a so-called beach club, which was a pool with sand dumped around it and a terrace where they held dances, a place where my stepfather had worked thirty some years before. Since I was under 16 and couldn't work more than forty hours or past 6 PM I earned my fifty cents an hour seven days a week, picking up the trash left from the day before, cleaning and mopping up after dances, and working in the concession stand.

It wasn't a bad gig at all, and I kept at it until I turned 18. I was working with a bunch of guys from school, and you got to see all the schoolgirls in their bathing suits, and somebody usually had a bag of dope. I've got a lot of great stories from those days, though I still don't know the value of a buck.

It was also Whites Only. They had a membership scam where you had to be recommended by two current members to join, and they saw to it no brown-skinned people ever got recommended, and anybody who did recommend a Negro for membership found his own membership invalidated for some reason.

This didn't sit well with me, or with a couple of my co-workers, one of whom was a cheerleader who worked in the office and had to turn black applicants away. We were kids, and mostly dedicated to having fun, but there was a lot of gallows humor about it as a release. We had a locker room in back of the beach house that was dominated by the lifeguards, older guys, and there were the usual assortment of Playboy centerfolds on the wall. I swiped the back issue with the first African-American playmate in it from a friend's father's collection and added her to the wank fest. That sort of thing.

The best one, though, I can also claim credit for. The photos on the club ID cards were taken in one of those 4-shots for a quarter photo booths. I was screwing around with it one day (the value of a dollar!) with quarters provided by my office friend, and I discovered you could unplug the thing between shots and when you plugged it in again it took up where it left off. Soon we were all gathering around, switching subjects between shots, putting mops on our heads and pulling other teenaged goofs.

The next part was easy. Those booths had sample strips on either side behind a long curved piece of glass. We got into that and substituted our own pics for the samples, or mimicked the absurd forefinger-on-chin poses in the originals and substituted for one of the four. The owner never noticed. The owner's daughter-in-law, who worked in the office sometimes, might have, but she was cool.

It was a great teenaged larf that we'd gotten away with it, and the joke had gotten old after awhile but the lack of discovery remained a fresh source of amusement. Then one night I had a minor brainstorm.

I turned up the next day with a prop, and when the coast was clear took a series in my homemade Klan hood.

Those pics stayed up for the next three years, until they finally shut the place down. I keep hoping that machine'll turn up on ebay some day.
Email ThisBlogThis!Share to TwitterShare to FacebookShare to Pinterest