Will No One Rid Me Of This Meddlesome Marionette? 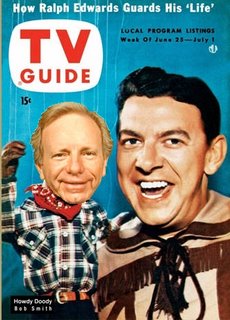 "I am disappointed by Democrats who are more focused on how President Bush took America into the war in Iraq almost three years ago, and by Republicans who are more worried about whether the war will bring them down in next November's elections, than they are concerned about how we continue the progress in Iraq in the months and years ahead."

Maybe it was simply an accident of timing, but whatever mass market news I heard yesterday seemed to be covering this week's administration-approved script--Cut and Run or Stay the Course?--as though this now summed up the Iraq Problem and we were about to sit down at the table after dinner and decide next year's vacation destination. I flip on CNN and Bay Buchanan (aka, the Buchanan who wouldn't have dodged the draft but would have wound up being fragged) was telling Wolfe that now that Bush had made the forceful case for remaining in Iraq for infinity x 2, and the Democrats had backed him (Bay apparently being the only English-speaking person who was swayed by that sham vote in the House), he needed to do something or other with his speech tomorrow. Sorry, I stopped listening. My wife got delayed at school, so I went upstairs to read and idly flipped on the radio. All Things Considered was examining what Congresspersons had heard from their constituencies when they went back home. First up was Indiana's Mike Sodrel. I think it was Sodrel, anyway. It could have been Souder or Buyer or Chocola; I can't see much difference and it would require a week's study to find some. For the Democrats they had some guy from Georgia. The choice here, of course, is designed to give the listener a wide range of public opinion, from what people on the eastern edge of the South are thinking to what people on the northern edge of the South are thinking. Surprisingly, it turns out that they're not happy with the way things are going in Iraq, but they don't believe we should just load up Thursday night and sneak out while everyone's asleep. Democracy in action.

Look, I like a good anti-war demonstration as much as the next America Hater, but, y'know, it really seemed designed to frame the story as Staunch Commander-in-Chief vs. Dope-Crazed Pacifists. Maybe I'm just too sensitive. But then, 2/3 of the country is sick of him and his policies, and fully half don't believe you can trust what comes out of his mouth, and they weren't all out waving signs on a Tuesday afternoon. My suspicion is that you could find a band of protesters in the vicinity anytime the Prez deigns to breathe the same dangerous air as his subjects, so why show them now? Or put another way, why didn't you show them for the first 3-1/2 years of this shadow government?

NBC followed this with--oh, you'll never guess--a piece following a Congressman home for Thanksgiving where he gauged his constituents' sentiments about Iraq. Mark Foley, the Republican from the 16th District of Florida, to be precise. Voters there told him they weren't particularly happy with how things had gone in Iraq, but they didn't think our military forces should don false beards and start walking home backwards while whistling and hope nobody notices.

So there you have it, a sampling of opinion from the East South, the North South, and the far Southeastern corner of the Moon. I would have liked to have heard from Wyoming, just for the sake of completeness, but they've only got one guy so he was probably pretty busy.

Mind you, I'm not saying this was slanted; I imagine that at least part of the thinking was to see what our Congresscritters are hearing in decidedly Republican-leaning areas of the country. And I understand that the story sort of presented itself, what with all these Dedicated Public Servants going home just after the big Murtha dust-up an' all. These were features, not news. But on the other hand, Red states and Republican districts aren't driving the story anymore. Their vision, like their pet war, is in tatters. They screwed the pooch, and no rallying to the cause or informed reconsideration is going to change things. Republicans could win every House seat and defeat every Democratic Senator next year and it's not going to change anything in Iraq.

Which brings us to the ever-reliable Joe Lieberman, whose warflogger wet pipe dream of a column for the Wall Street Journal Home for the Ideologically Insane just happens to turn up at the beginning of the week when his President needs him. It's simple enough to dismiss him as George W. Bush without the ranch, or to suggest that glowing portrayals of our "success" in Iraq ring a tad hollow coming from the premier WMD hunter in the halls of Congress, whatever the party. Instead, let's turn to today's Q&A with Professor Cole:

US ambassador in Baghdad Zalmay Khalilzad is going to start direct talks with the Iranians.

Say what? Wasn't Scott Ritter saying only last winter that a Bush military attack on Iran was in the offing? What has changed?

1. The security situation in Iraq is deteriorating over time.

2. The Shiite religious parties won the Jan. 30 elections, which was not what Bush had hoped for.

3. The Neocons are going to jail or given sinecures, and their star is falling faster than the Chicxulub meteor that killed off the dinosaurs.

Read the whole thing. Is there some possible explanation for why we'd be ringing the bell at Axis of Evil headquarters if Iraq was all roses and vastly improved electrical service? I don't think it's possible that even the Bush administration believes this neocon fantasy stuff anymore, but there's Joementum dutifully excoriating his own party for 'em.

And Joe's concern--now--that the coming elections might be influencing some Republican behavior is really quite moving in a Hey, Didn't You Used To Be A Member of the Legislative Branch? sort of way. I don't recall him protesting the War Resolution coming up just before the last midterms, but maybe I just missed it. And I really like the whole "now is not the time to be arguing how we got there in the first place" routine. In '02 it was time to stand united and give the President our backing to do what was necessary (after consulting with our allies, of course). In '03 it was immoral to talk about the bottomless pit we were falling into, because we "had troops in the field". '04, of course, was about Who was best qualified to Keep Us Safe. Now, apparently, is the time to shut up and sign up for an endless occupation. After that, I suppose the cockroaches get to sort it out.
Email ThisBlogThis!Share to TwitterShare to FacebookShare to Pinterest

Goddamn it. Can't you warn me before you post really frightening artwork?

So, if I read this right, we're supposed to just go out and kill Joe L. for you and you'll deny suggesting that you wanted us to do it. I don't suppose you have a fab cathedral where we might accomplish this? Plus, if it plays out the whole way, Joe L. ends up canonized. Ick.

I think we're just supposed to cut his strings or hand the guides over to someone like Dean or something.
Which actually isn't a bad idea.

Also, I would suggest that Pat Buchanan would have been just as likely to be fragged, which is probably why he stayed home.

Imagine how history would have changed if Henry II had just run someone against Becket in the primaries instead....