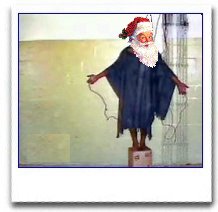 We're traditionalists in this neck of the woods, so I've been waiting for the real beginning of the War on Christmas season like, well, like a kid waiting for Santa. It's not like I've been idle. I mean, you don't just go off to war without planning for the thing, do you?

And we're just a little partisan band here. We don't have the resources to file a bunch of nuisances suits over red and green napkins in public schools or Christmas trees on the lawn of the Governor's mansion, and we just don't go in for vandalism, at least not with the same enthusiasm as when we were young. So in order to further the Glorious Cause of eliminating Christianity and turning the Most Powerful Nation on Earth into a dull grey Socialist workers' paradise, we're just trying to spoil Xmas for as many people as we can. Meaning we're branching out from our friends and relatives.

So I've held off, but starting tomorrow that damn bell-ringer at the grocery store is gonna be challenged to recite Bible verses supporting the notion of Virgin Birth. With any luck we'll make the contents of the bucket the stakes, and I'll donate the winnings to the ACLU. I'm planning to catch youngsters running through stores without parental supervision and tell them there's no Santa Claus, and every time a clerk wishes me a "Merry Christmas" instead of "Happy Secular Winter Solstice" I'm gonna reply, "Try to improve you sex life," and hand them a photocopy of some Kama Sutra positions I've printed up. And I'm gonna sing along with any piped-in Christmas carols, only loud and off-key, throwing in a lot of "Doo-dah, Doo-dahs". Additional suggestions welcomed. Let's join the FAUX team in making this the worst Christmas ever!
Email ThisBlogThis!Share to TwitterShare to FacebookShare to Pinterest

Doghouse, I am so with you on adding the "Doo-dahs". I think you should put together a Xmas Hater's Manifesto.

Yeah, the joyous carols I heard at the supermarket today would have benefitted greatly from a doo-dah or two.

Those are some excellent tactics to add to my rather tired 'Bah, humbug.'
With the Great Mother's grace, this year we shall be victorious!

I myself just work at using a higher level of curmudgeonly surliness as my hurliday cheer.

My general reply to a hearty "Merry Christmas" is that I was divorced from Christmas as a teen, I'm not going there again.