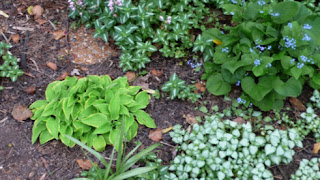 Hosta "Chartreuse" (which doesn't get any bigger) left, Siberian bugloss in flower, right (there's no way I can capture the intensity of that blue; it's probably my favorite Spring display), and the intervening pictorial warning about planting dead nettle (I planted only the white one; I now have three leaf colors and four flower colors, and it takes season-long dedication to its wholesale destruction to keep it from taking over everything. Pretty, though).

STRANGE season, but then they all are. A tropical December that discouraged pruning, followed by extremely cold temps, and then a well-behaved March followed by a frozen April. Great crocus year. Lousy daffodil display, unless you really like their leaves. Next to no tulips. The daffodils belong to my Poor Wife, who never met a plant with irritating habit she didn't want to put someplace wholly inappropriate. I like daffodils, too, especially in someone else's yard, where they can spend the next three months splaying, blocking views of everything around them, and slowing dissolving to pools of brown slime as someone else's problem.

Roses survived; it was touch-and-go for Pascali for a bit, and April re-pruned the climber, and they all lost out on the month of Spring sun they usually get before the big trees leaf out. The herb bed is showing its age, especially the grand old sage in its center which was the first thing I planted here. Various nippages being overcome now. The Japanese painted ferns, especially, did not care for the extended Winter remix, and the two tassle ferns I transplanted three weeks back groused about that for a while, but everybody will be fine. Catbirds have been chasing through the yard, and one of them accompanied yesterday evening's weeding with a fine display of virtuosity. Oh, and either the possum population expanded over the winter or the neighbor's daughter is refusing to clean up after her dog again; I'll have to track down the source of the smell in the next day or two.

Whoa. You really know your garden-stuff. I wish I knew more names of things. I am trying to learn. I am especially trying to learn about roses. Are there any flashcards? Like "Know Your Roses", or "101 Roses". Want to make up a set? It could be a fun family game. (This proves I don't have a family.)

I could be your intern for two weeks (don't tell me Poor Wife wouldn't enjoy having a houseboi for a short time) and learn stuff. I could also sleep in the yard and act as a scare-possum.

PS: Can you make Norbizness come back? I miss him.

I know the names of stuff. I just can't grow it. I'd volunteer for internship as well, but your Poor Wife would probably prefer her plants alive. I've got some fantastic plant and flower cardstock models I've built, though. Occasionally some moron tries to mist them and I have to rebuild.

More pictures! Can we see some ferns?

I envy your deadnettle. For me, it survives but never even reaches luxurience, much less spreadaciousness.

Being out in California now, I really miss my plantings of pulmoneria, especially the varigated-leaf varieties. I've tried two or three times to keep a single clump going in my Zone 9 backyard, to no avail. The flowers curl up and take the rest of the plant with it as it dies back. That was the only ground cover hardy (or stupid) enough to take root under three 90-year-old black walnut trees back in Chicago. Good times...

BTW, nice picture of Joel Hodgson on the site. That brings back good times as well. ;)

Coming to this party late, but love your garden blogging. I agree with the other commenters -- more pictures, please! I've put in an asparagus patch as my grand experiment, and they've started to come up and fern out, feeding the roots for next year. Love your blog.