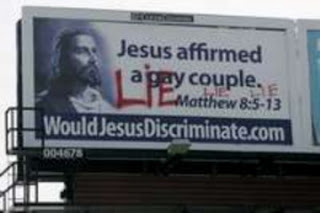 The billboard claims "Jesus affirmed a gay couple."
A vandal's own statement -- the words "Lie, lie, lie" spray-painted in red -- delivered an opposing view above them.
In some ways, the argument in giant letters above an Eastside street reflects society's ongoing argument over homosexuality -- on issues ranging from same-sex marriage to gay clergy.
The discussion just got more intense in Indianapolis where 22 billboards and 1,000 yard signs went up recently as part of a campaign based on the premise that the Bible approves of gays and lesbians.

THE curious thing--for me, anyway--is that here vandalizing a billboard engenders, in the Star, a debate over "the issues" (including a sidebar exegesis on the relevant Biblical texts, but none on, say, whether defacing someone else's billboard constitutes covetousness, or theft) whereas when two of my wife's former students were caught a couple years ago with paint and a "Bush=Hitler" stencil, having defaced a Bush/Cheney billboard, the only debate that sparked in the pages of the Star was whether they'd get jail time or community service.

The depths of hypocrisy can never be fully plumbed.

reminds me of graffiti I saw before the war began "who would Jesus bomb?".
Slamming these hypocrits with their own, supposed, religion is a pretty good tactic.

Saw a lovely bumper sticker on a car,driven by a military man;" I'd
rather hunt with Dick than have
Hillary as my Prez"