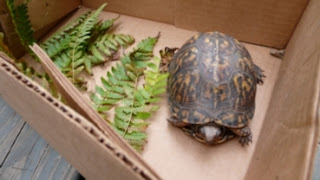 Bailey the Eastern Box Turtle (T. carolina carolina), with fern added to simulate what he's used to (fern added just so I could steal that joke from the late Mitch Hedberg).

BAILEY, named for the creek he was eventually relocated to, was found a week ago Sunday (by my wife) trying to cross our street. I left him in the back yard while I took care of a couple of things, and when I came out he had vamoosed. Gone. 23 Skidoo, hope you're not turtle stew. Couldn't find him anywhere. I hoped he would turn up in a day or two, but no luck. I'd forgotten him (male, check, red eyes) until last Sunday when he was rescued again, this time from the four-year-old next door who found him somewhere (he wouldn't say, exactly) and looked about to test his tensile strength (that is, the turtle's) by hurling him to the driveway with his four-year-old's spastic screwball that I stopped just in time. I then explained to him that this was an Eastern Box Turtle, one my wife had found, and how I was going to return him to his home in the forest, and how no matter how much he looked like a rock he could be hurt by throwing him, and how if his father ever buys him another cowbell or other percussive instrument, or anything in the bagpipe family, I was gonna murder his entire family in their sleep. I grabbed the only empty box I could find in the garage. It had one end loose. I told the neighbor child he'd better go home and have Mom wash his hands really well. I went inside to find some tape. As I was about to exit I see the little bastard dashing off with the box. This causes me to open the back door without considering Larry, the Cat Who Just Waits For The Worst Possible Moment To Dash Out The Door, who chose this moment to dash out the door. And through the gate the kid had left open.

Then I thought I caught a break, as Larry dashed into the open garage instead of heading for the front yard. I followed and pulled the door closed behind me.

It should have been sufficient to notice his reaction. Loud noises are the only things Larry is known to fear. This does not include loud noises emitted by humans as he carries off their eyeglasses or spills their beverages. Just accidental, unexplained (to him) loud noises. And Larry freaked when the door closed, but my mind was occupied with questions of how one makes a four-year-old's death look like natural causes, and I cornered him, and picked him up, and...opened the garage door. And a newly re-panicked Larry climbed over my neck and down my back, without giving me much consideration as he did so.

I did manage to corral him again. I knew it was hopeless to try to attract any help through the closed door, so I tried to inch it open as quietly as possible. I made it out on the third try. I deposited Larry in the house and went to find the turtle. The entire Henderson clan was there peering into the box. I like the Hendersons. They have that quality I most admire in others: they keep to themselves. The boys are six and the aforementioned four. The whole lot used to stay indoors unless the temperature was between 76º and 78º, and they probably had a relative humidity requirement, too, that I was never able to identify given the small sample size. That was Mom, apparently; with a few years of 'em inside with her all the time she's become a convert to the Free Range system, while she mostly stays indoors and trusts her luck.

The boys have the requisite au courant surnames as first names. Parker's the younger one, the animal lover. O'Toole, his brother, is perpetually sullen, which I fully appreciate since I, too, had a two-years-younger sibling.

I knew it was no good negotiating or trying to explain. The kid's animal crazy, and Mom has convinced him she's allergic to dogs and cats. I thought they might want to keep him. Plus I think they'd heard me swearing in the garage two minutes earlier as Larry clawed his way across me, so I just shouted, "Parker, where did you go with my turtle?" "Oh, is this your turtle?" Dad asked. No, you cow-college weed chomper, your four-year-old just found an Eastern box turtle complete with his own box. I antied up the threat of Salmonella for good measure, then immediately regretted it as Mom appeared to be weighing the pros and cons.

Dad hands him over as O'Toole cranes his neck for a last look. Bailey, quite possible sensing that he'd just dodged another certain-death experience, stirred. "Hey, that turtle's alive!" shouts O'Toole. I'm watchin' that boy real careful for the next twelve years.

SO Bailey gets put in the passenger seat and we drive a couple miles to the power substation at the big bend of the creek. This was the turn-around point when my Poor Wife and I hiked our own neighborhood instead of a state park, back before her knees gave out. I hadn't been back there in a couple years, but it seemed promising. There was about two acres of second-growth woods by the creek there, plus a cleared bank beside the power station wall where the thing turns from the south. Plenty of grub, some sunshine, the possibility of some turtle hotties on Spring Break. You see where this is going, don't you?

The first thing I noticed was the large open field west of the station now had trash cans. And two soccer goals. And, as I turned the corner, a bulldozer parked where about a quarter of those two acres of trees used to be. The giant ruined tulip poplar which used to be the silent center of the place was now plainly visible, front and center. So I marched up there, and just past the tree, nearing the bank, I spy just to my left one of those butt-ugly and totally useless rustic "meeting places" one sees in state parks: series of plank benches, couple of store-bought numbers for the lecturers to use, two thoughtful trash cans. Both half-full of pop cans; I checked later. There never used to be any trash at all in these woods. Fire pit, of course, no doubt illegally placed if not illegal altogether. Then I happened to look up. To the six-foot cross nailed to one of the trees, behind the "altar".

There was an engraved stone at the entrance to this sanctuary I'd missed coming in. Something-or-other Worship; I was feeling too sick to take notes. I walked with Bailey past the new Rustic™ two-lane bridge, back to the curve of the creek. Still sunshine, still water, still some trees that might not come down even when someone decides that fellowship around a rustic stone barbecue would taste really good. Especially if they ran some electricity back there.

I pulled back the tape and let Bailey climb out. One of us was happy. I walked back along the path trying to convince myself that this probably meant that no one would touch the remaining woods for a while yet, since that would spoil the carefully shaped wooded religious retreat they'd carved out of an actual cathedral of trees. I have no idea who owns the property. I sure hope a public utility didn't turn that tract over for desecration. I don't know the neighborhood. I don't know where there's a church nearby. But these days there always is.

Don't get me wrong: it has nothing to do with the fact that a church did this, even though those Churchmalls have been a major deforester of Marion County in the past decade. God knows secular interests might have done worse. It's not even the abominable fire pit which will never be needed because such people would never be out when warmth wasn't pre-ordained; they'll just burn in it because that's some aging Boy Scout's notion of the wilderness experience. The smell of a campfire and a cold can of Coke™.

Nah. As I got back to the sunlight that now hits you thirty yards earlier I thought, "It's the unintended message. The one no one else will probably get. It's the idea that the same God who made those magnificent tulips and ironwoods would be Foolish enough to give you people bulldozers."

Anyway, God speed, Bailey. If you'll excuse both those jokes.

I can always count on a rollicking good screed when I come here.

I used to find box turtles all the time when young in Eastern Pennsylvania. Haven't seen one in ages. Best of luck to Bailey, but I fear for the species.

OMG, me too. We will not be treated kindly when Box Turtles take over. I can picture myself pleading pathetically, "But wait, wait! I know somebody who knows Bailey! I have a real connection with Box Turtles! Please! I don't wanna get all extinctified!"

BTW, dh, please do keep an eye on that youngun.

I came across four or five of them last summer here in Maryland and I'm hoping to see more now that it's warmed up. Also there's some kind of turtle here that gets quite a bit bigger and local people eat them. I mean by local people the Maryland people who seem like real southerners or country people -- they are scarce in comparison with the rootless suburban wanderers like me.

Kia,
Maryland tried to secede. Martial Law was imposed. That makes them "Southern". I will pass on the rural debate.

Bailey and his Box Turtle cousins live 25 to 30 years. What is that little piece of heaven (pun intended) gonna look like in 2020? FMR, there is already a bulldozer eyeing him?

I hope that was the nearest suitable habitat for Bailey. The Mass Audubon site says that turtles shouldn't be relocated. They don't do well in an unfamiliar area. Of course, they don't do well in boy-infested suburban yards, either, so you did have to rescue him from that situation.

Counted 17 turtles basking in the Fens yesterday in Boston, almost certainly painted turtles. It's always a thrill to see how wildlife can thrive when given a little bit of a chance. I hope Bailey's woods doesn't get 'dozed.

Knew a family with two kids Tyler and Mason. When they were having the third, the question was whether they were going to go for Roofer or Plumber to finish out the "All Trades" family.