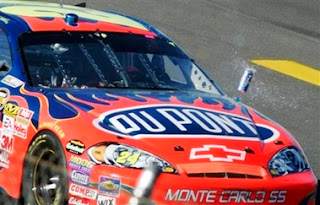 IT'S likely they've cleaned up the last signs of the traditional NASCAR fan salute to a Jeff Gordon victory by now. I'm just guessing that the protocol is track first, then the stands, so the Alabama champagne shower--a barrage of tall boys of indifferently-fermented hog feed--is probably given pride of place. Hell, they can probably collect the ones that didn't bust an' sell 'em back to Gomer next October.

Real racing fans are outraged by this sort of shit, but then real racing fans have never particularly been NASCAR 's target audience. The matter was decided early, like about two minutes after the celebration was over, when Jeff Gordon His Ownself expressed his admiration for people who would try to hit a moving target from that high up in the stands. Soul of a product pitchman, that boy.

Within a couple hours NASCAR had issued a statement moderately deploring hurling debris on the track, but the paid shills were pretty much attuned to the vibe all along: You Don't Mock The Cult of Earnhardt Mysteries. Not in NASCAR. Not if you want to keep eating regular. By Monday night, when the highly entertaining Michael Waltrip pointed out to Dave Despain that it wasn't the guy in the 3500 pound car built to withstand 190 mph collisions who was gonna get hurt, but some unsuspecting fan hit with an aluminum missile that failed to clear the fence, it was already sounding wistful and vaguely Pollyanna-ish.

And yes, it may well be my most trite observation of the month, but if you could have found two Very Large Gentlemen of African Ancestry near the place, and if they'd have decided to charge into the stands to extract Goober's remaining tooth, you'd have seen the replay forty times an hour on CNN the past two days. That is, unless it's topped by the thought experiment of the ever-desirous-of-international-expansion France family faced with the spectacle of hundreds of cerveza bombs flying in Mexico City when Junior punts Montoya into the turn three wall. Jes the Good Ole Hombres lettin' off some steam.

This is the really interesting thing about watching NASCAR. (God knows it's not often the contrived racing.) It's how the dictates of large-scale popularity (albeit gleefully overstated) have collided with the phony Moonshiner creation tales of NASCAR 's past, how it came to be a symbol for the loud-mouthed reactionary politics of what is now called its Southern Fan Base, and the stumbling moves it's been forced to make since. At some mysterious point NASCAR went from using that aesthetic to bring in the rubes to actually adopting it as a governing principle. NASCAR became the I Hate Political Correctness Racing League. It instituted an American Products Only policy. It was pointedly slow to eliminate leaded gasoline (in use up to this year's Daytona 500) even as Indy cars have run on methanol the past thirty years. And it was slow to the point of being adverse to implementing or mandating safety features. "We aren't Communists," as the NASCAR philosopher and perennial back-marker Kyle Petty explained.

Of course, that was before St. Dale of Earnhardt was killed on the last lap at Daytona in 2001 in an accident he would have survived had he been using a head restraint system. Earnhardt's crash was almost identical to the ones the previous year which had killed Kenny Irwin and Adam Petty, which NASCAR responded to with quick fixes and half-measures; Earnhardt's death was followed by a season-long investigation which ultimately blamed, sort of, seat-belt manufacturer Bill Simpson and then quietly settled his lawsuit out of court. "There goes the evidence!" as Fatty Arbuckle once said.

It was Formula One which found the HANS system, developed in the 1980s, in response to a skull-fracturing crash involving Mika Hakkinen, and which then had to reengineer it for single-seater cars. NASCAR could have adopted it right away. It was Indianapolis' Tony George who developed the SAFER barrier. NASCAR , which reminds everyone within earshot that it's the second-most popular spectator sport in the US, whether or not it is, can't even be bothered to pony up for a traveling, professional firefighting crew.

And somehow, at the height of its popularity, NASCAR found itself at the mercy of that same reality that gobsmacked the real Confederacy as well as the counch-mounted artillery of its sheet-wearin' descendants. It had to look to big-city viewers and international markets to continue to grow. It had to welcome Toyota into the series. It had to fluff Juan Pablo Montoya at its Mexico City Busch race this year--the fawning coverage angered a lot of knuckle-draggers who've gladly lapped up the Soviet-heroic portrayal of middling-talent Dale Jr. for the past several years. Like the Republican party, NASCAR finds itself unable quite to shake the forces of Bronze Age barbarism it used to court, even as they embarrass it, even as it tries to inhabit a world that passed them by a century and a half ago.

This is the only thing I have ever read about NASCAR that made it make any sense to me. I probably would not have read it had it not been written by you -- (please file that remark for any later temptation to go all Norbizness on us) -- nobody seems to be able to write about it without being overcome by all those fumes of redblooded nonelite American authenticity.

I'm torn: I sincerely appreciate that YOU wade through any NASCAR crap, thus alleviating my need to do so; yet I don't feel so good knowing I've bought into some of the myths surrounding NASCAR without really caring to determine if they were shit or not.

So, you do me a service, sir, and yet I feel dirty. Two birds!

I was in a weird mood last night. I wondered what would happen to any car that had one of those peeing kid stickers aimed at a NASCAR 3 or 8.

I suspect such a car would be run off the road.

How ironic. "After all, we're not communists" is a line from The Godfather when the heads of the Five Families met to agree to a truce so that they could continue to earn money from their organized crime.

...the fawning coverage angered a lot of knuckle-draggers

What is this - some kind of Imus-inspired racial slur? You beast!