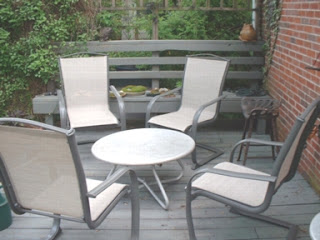 (Actually, they're made in China, which might qualify as the terrorists winning, or sending the game into overtime, in the same sort of circles where they keep the scorecards on this sort of thing. You know, where the French recently became freedom-loving geniuses. And what really confuses me is that we ship the manufacturing jobs these things involve overseas in search of cheap labor, but then I have to spend an hour screwing them together for nothing! I'll never understand economics. Thank god.) 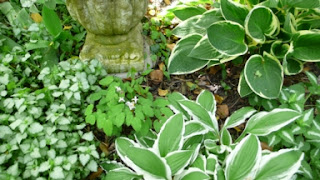 Barrenwort (center) in flower for the first time, though they're probably too small to make out in the picture. The hosta at lower right is "Gingko Craig", which is my favorite of all the edged-leaf hostas. The white is almost pure. They are, of course, surrounded by deadnettle. Everything is. 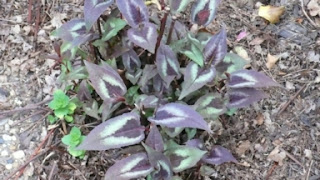 Japanese knotweed with a couple of renegade mints to its right.

Your hostas look great. The Japanese knotweed looks very different than the kind that grows out here in Seattle. It gets huge here, is invasive, and supposedly it's illegal to plant it any more in our neck of the woods. One of our Pacific NW kudzus, if you will. Your type is pretty.

This is why I hate common names of plants, really. Yours does indeed look very different from our horribly invasive knotweed here, but the name made me twitch a bit.

Now, if only I could get some hostas to grow like that...

I have that invasive kind of knotweed too in Ohio. It is nasty stuff. They are actually related, but there are a few that have been hybridized to take away the 'invasive' part. If you're so inclined, look up "persicaria"