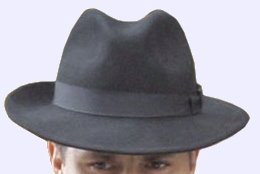 Apparently Jack Abramoff not only set back the cause of fedoras another thirty years, he also set off a minor storm of idiocy and the blogosphere's world-renowned self-correcting feature. JPod called it "the black hat of a very Orthodox Jew," and David Brooks' crack research squad came up with "pseudo-Hasidic homburg," which manages to be wrong three times in just three words, probably a record even for him. Howard Fineman and MoDo, those starry-eyed Romantics, spied a gangster thing going on.

It was left to Stepehn Hirsch in Salon to straighten things out with some expert testimony. It's a Borsalino Como:

What struck me was that Abramoff was wearing my hat, a Borsalino, the ne plus ultra of Yeshiva boy caps.

I couldn't pick that out from the teevee loop I saw a half-dozen times, or any of the still photos (I've lightened the one above to bring out the details). Not sure I could have, anyway, but ne plus ultra it is. Borsalinos are the best, and the Como is their best design. It was actually on my short list last time I made a hat purchase, but I got a summer and a winter porkpie instead. And saved a lot of money.

Abramoff is an Orthodox Jew. So the hat is neither pseudo-anything, nor is it Hasidic, and a homburg it most definitely ain't. Hirsch speculates that Abramoff might have been seeking his comfort zone. Okay. But how'd he screw up a $200 hat?

There's been some quibbling about crown height and brim width. I think he's a little shy on the width--it should have been available in increases of 1/8 inch, and the salesman should have told him his face required a little more of it. The crown seems okay to me.

But look at him--he looks like he took the thing out of the box and plopped it down on his head with a T-square. Work the thing first, man. The center crease is too deep; that might not have been amenable to to manhandling, but the haberdasher could have steamed it for you. And those side dents look like they were made by machine. It's your hat! Make it your own. Roll the brim, push it down, do something.

Looking at it, I can't help but think of the pseudo-style and pseudo-elegance of all the wealthy Reaganauts of a certain age I knew, the ones who bought Italian suits and silks and still looked like they shopped at Penney's. The guys who thought they were knowledgeable because they could say "Cohiba". The ones who read The Wine Spectator and bought up designer California cabernet and first-growth Bordeaux, then drank them five years before they were ready, after making sure their guests saw the label. The ones who thought money equalled quality equalled class, and class meant you were more worthy than the next guy.

Just where the hell have you gone, Joe DiMaggio? In the living memory of some of our older citizens, American culture, American food and wine, American style meant cornball. That wasn't always deserved, but we had a national inferiority complex about it. Sometime in the 70s we decided to change that (a direct result, if I may say so, of the evil Sixties countercultural interest in the handmade, the purely decorative, and the foreign). But somehow with Reagan we simply jumped to the self-congratulatory stage without ever paying any dues. Which is why we now turn out boatloads of halfway decent $15 wines that cost $50, and why we make superstars out of some guy who puts his hands all over your food before charging you $75 for a meal. Finesse and hucksterism do not mix. You think Fred Astaire would have worn his hat like that?

Ultimately, that damn thing just screams aging Yuppie scum. Which is fitting, I guess, even if the hat isn't.
Email ThisBlogThis!Share to TwitterShare to FacebookShare to Pinterest

So what you're saying is, Jack's hat is the moral equivalent of Dubya's plaid shirts he wore during the election.

Really, I didn't think it looked too bad on him. But I have this rule about getting involved with people who've been in bed with Grover Norquist.

Any hat that isn't a backward baseball cap is OK with me.

You have a gift. That was brilliant.

I guess he didn't break in his Cascata baseball cap either.