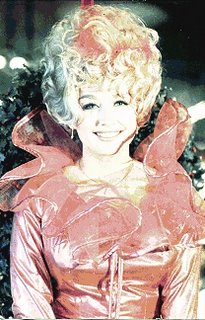 All right, there was an internal debate at BLTR over that picture, but I'm using it for a point of sorts, which is as good an excuse as any. We try to keep the Lileksian hilarity to a minimum here.

That's Dolly from the old Porter Wagoner Show, where she got her Big Break. We used to watch the thing for its mockery quotient: the faux Down Home set, Porter in his sequined Nudie suits and white Duck's Ass hair, and...Dolly, five feet of the what-the-hell is that? They did a can't-miss commercial for Breeze laundry detergent. Breeze came with a towel in every box. A washcloth in the smallest, up to a beach towel in the Jumbo Economy Size. People told me there wasn't much soap left in the box after you tugged the premium out.

Dolly was priceless. After Porter displayed the towel, Dolly elaborated: "A candy-striped towel!" Only with her accent it was more like "caindee stropped talle." "But you can't buy 'em," says Porter. "Ah cain't bahum?" she replied, momentarily nonplussed.

We never paid attention to the music. But then one day Dolly got a spotlight. She sang "Jolene." What a freakin' voice! How'd I miss that? And she wrote the damn thing, too, a remarkably good storyteller number in complete contrast to the dreck Wagoner usually did.

I never underestimated Dolly after that. I rooted for her. Still do. I was even glad when her pop dreck went platinum. Even Kenny Rogers couldn't change that. (Although Kenny's rehabilitated himself on Reno 911 lately.) Not to say I bought any, but still.

And Dolly had the smarts, and the gall, to tell Colonel Tom where he could insert his demand for 50% of the publishing rights to "I Will Always Love You" in exchange for Elvis recording it. (That was Elvis' standard deal, apparently. Great racket. The Colonel screwed him, and he and the Colonel screwed Arthur "Big Boy" Cruddup.) So she, not Lisa Marie, got the dough when Whitney hit with it.

Dolly, dammit, if all Christians were like you the world would be a much better place.
Email ThisBlogThis!Share to TwitterShare to FacebookShare to Pinterest

Yeah, well, I admire your enthusiasm for her. No, really. It's also Edgar Allen Poe's birthday. And don't be snarky; he's dead. I once drove past a little museum dedicated to him in Richmond. The place was so fucking eerie from the outside, I decided not to take my wife and young son inside. Sadly, I have not had the opportunity to go back.

Well, good for Dolly, but I hate her kind of "music."
Edgar Allen Poe, on the other hand, gave me hours of creepily wonderful reading pleasure back in junior high. Hail Mr. Poe! Although you gave me nightmares, may ye rest in peace.

I agree, 100%. I think she's wonderful and I've always loved her music, though I hate pop and country in general. She's just so thoroughly GENUINE, and I mean that completely UN-ironically! And, while I'm at it, I just want to say that her version of I Will Always Love You beats Whitney's version by a truckload. Between the two of them, you can tell who really means what she's singin'. Thanks for the tribute.

Ditto the Dolly kudos. She is genuine and treats her fans so well. I saw an interview with her once when she was talking about "going to the store". She said that she just has to prepare herself that it's not going to be a quick trip and that she'll be talking to her fans and signing autographs. And the special she did with Graham Norton a few years ago is to die for!

Yeah, what everybody else said about Dolly. I don't really like her music much, but I can't help but smile at her exhuberent humanity whenever I see her or hear her voice.

I've heard a couple of interviews with Ms. Parton. As the Car Guys would say, she's someone you'd want to have coffee with. She also has a fabulous voice and songwriting talent. I first really listened to her on the "Trio" albums with Emily Harris and Linda Ronstadt. Good stuff.

You can't mistake her voice ever. I tell ya, I would still marry that woman in a heartbeat.