Yeah, But It's No Travelgate 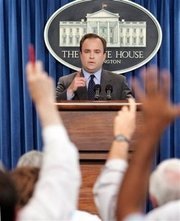 His lips are movin' again.

Abramoff had "a few staff-level meetings" at the Bush White House, presidential spokesman Scott McClellan said Tuesday. But he would not say with whom Abramoff met, which interests he was representing or how he got access to the White House.

Since Abramoff pleaded guilty two weeks ago to conspiracy, mail fraud and tax evasion charges in an influence-peddling scandal, McClellan has told reporters he was checking into Abramoff's meetings. "I'm making sure that I have a thorough report back to you on that," he said in his press briefing Jan. 5. "And I'll get that to you, hopefully very soon."

McClellan said Tuesday that he checked on it at reporters' requests, but wouldn't discuss the private staff-level meetings. "We are not going to engage in a fishing expedition," he said

But that's not a "fishing expedition": it's a request for specific information. A fishing expedition is when...wait, who'm I talking to?
Email ThisBlogThis!Share to TwitterShare to FacebookShare to Pinterest

I was kind of surprised to see some straight reporting from Nedra without one of her dreaded introductory clauses ("Although the President is widely regarded as likable and ethical...")

He should have stuck with "cannot comment on an ongoing investigation". He's got that one down.