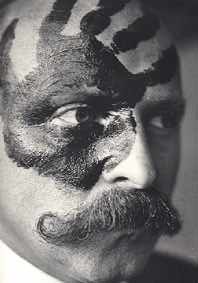 Just keep him away from the Rembrandts on ironing day.

January 24,2006 | PARIS -- A court has convicted a 77-year-old French man for attacking artist Marcel Duchamp's famed porcelain urinal with a hammer, rejecting the defendant's contention that he had increased the value of the art work by making it an "original."

The court gave Pierre Pinoncelli a three-month suspended prison sentence Tuesday and ordered him to pay a $245,490 fine.

Pinoncelli also was ordered to pay $17,616 to repair "Fountain," a work worth millions of dollars that was chipped in the Jan. 4 hammer attack at the Pompidou Center. The work was part of an exhibit of the early 20th century's avant-garde Dada movement.

The Pompidou Center had sought more than $523,930 for the damage.

The January urinal attack was not the first for Pinoncelli. He urinated on the piece during a 1993 exhibition in Nimes in southern France.
Email ThisBlogThis!Share to TwitterShare to FacebookShare to Pinterest

Duchamp would be proud of P. P.

He's actually got a pretty compelling argument; Fountain has become mainstream, and thus M. Pinoncelli's act is the true Dadaist statement. Hmmm... you could get some interesting metaphysical arguments about the nature of art out of this one.

Is the sentence handed down by the court Art as well>

He is the World's Champion artcritic!

Pee on the Pompidou!