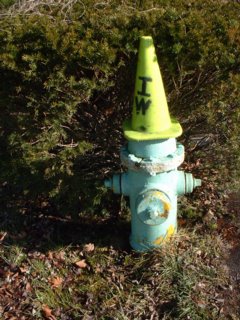 • That's the fire hydrant next to my property. The amusing little chapeau came courtesy of the Water Co. we sold to private investors a few years back. I love the lime green; it hasn't at all been nauseating me for a decade now on every home makeover show I have the privilege of paying for each month. iz dis gonna b kewl 4 evah?

What happened is that we had our third major water main break in four years last November. The actual break occurs two blocks east up the big cross street to our south, but we're just one lot south of the (usually dry) creek bed it all runs into. As with the last two, it was fixed in a few hours. This one wasn't nearly as spectacular as the preceding ones.

But then a different break occurred on the other side of the street a couple weeks later, and that one just sort of bubbled and oozed away. It seemed to stop for awhile (nobody saw any repair crews), then rebounded early Christmas week. It was the following week before they showed up to fix that one.

Then last week I was driving home and a very large truck had our very small street all but blocked. I had to stop to let a car coming from his direction pass me. As I got to the other side I saw the guy who was supposed to be directing traffic, well, not directing traffic. There was an identical truck straight ahead, and sure enough it was parked blocking my driveway. They were running a line down a hole in my neighbor's yard.

Two days after they finished that, I noticed there was a sizable pool in my neighbor's yard. I waited a couple days, and when it was still there I called the company to report it. (My neighbor doesn't see his lawn in between the time he mows it for the third and last time of the season, usually in August, and the time one of his children gets lost in it the following June.)

They came out the next day and gave it a hat. That was Tuesday. I'm gonna remember this next summer when they ask me to water my lawn at night so the golf course sprinklers won't lose pressure.

• For those of you following my wife's room assignment saga...oh, first, yes, Kathy, I really did fart in that woman's general direction. It's not particularly a talent I've nurtured. I have diverticulosis, and one of the prized items on my diet is a tablespoon of peanut butter now and then, but I'm only a man, dammit, and sometimes it tastes good enough I have a little too much, and some evil crackers. So it was just fortuitous, only not for her.

Well, it won't come as much of a surprise that the Evil Cabal of "regular" art teachers actually reneged on the whole administration-mandated room assignments and just stayed where they wanted to, meaning that the largest, most desired room (it has storage) now sits empty all but two periods a day. This resulted in a nasty email from the Big Office, but no disciplinary action. My wife, however, is now so fed up she isn't even speaking to me, no doubt on the grounds that that's preferable to what she'd say if she did talk. If it continues over the weekend I'm suing somebody for alienation of affection and loss of marital services.
Email ThisBlogThis!Share to TwitterShare to FacebookShare to Pinterest

Now, wait. Is your wife mad at you, or is this just one of those things where she's aware that it's unfair to take it out on you but that's all she's thinking about at the moment and if she tries to say anything it'll come out?

And what the hell are these people thinking? Wasting water is a sin. I'm not religious, really, even for a neo-pagan, but I mean it. People die every damned day because of lack of clean fresh water, and it will only get worse. And we act like fixing mains is a matter of personal convenience?
Dumbasses.

Same old same old, D.: you don't miss it until it's gone. Well, if you are a bureaucratic dumbass, this is.

Well, the right hat can solve a lot of problems. See your own previous post.