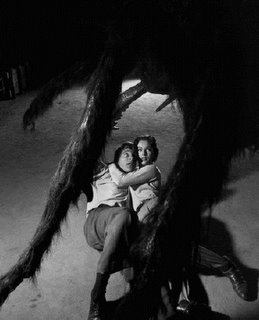 Mail's here!
Believe I've mentioned before that we get some organization's magazines in an ever-revolving carousel of double-digit IQ nausea (okay, I actually read Rolling Stone, but only in the john). The name on the subscription tag doesn't provide enough information to track the owner down, there's no way to figure why our address would repeatedly turn up as theirs, and the mailman won't take 'em back. That was established when we were getting six TV Guides™ each week; he told me I could go to the Post Office and fill out a form. But driving to the local Post Office is a daredevil act, caught between elderly 15-mph-with-the-wrong-turn-signal-flashing motorists and two nearby sidestreets where shortcutting maniacs routinely blow the stop signs. I've had three very near misses. Besides, after the second one started arriving it got to be fun, in a perverse sort of way. But then, we're a perverse sort of couple.

Last week brought the bonanza of all time: Us Weekly, the celebrity rag for those who find People a bit stuffy. I meant to report on it at the time, but my wife managed to lose it some where. So I confiscated this one.

Sad to report, but Us, which really deserves an exclamation point, is something of a disappointment on the only magazine rating scale that means anything: there's no letters column. My lonely search for a TV Guide™ replacement goes on. So here's a quick rundown on Tinseltown anyway; just don't get too attached:

COVER: Lindsay Confesses Extreme Diet Dangers.
Some underage talent sausage who's been operating in public for far too long with or without adult supervision couldn't handle fame, and now we're supposed to be concerned. But then I guess if you read Us you probably are.

PULL QUOTES:
"You have to hit rock bottom sometimes to get yourself back up to the top,"-Lindsay
"She's not letting herself worry about weight anymore.
-Lohan's mom, Dina. In what I can only hope was a letter from prison.
SIDEBAR:
Is Peer Pressure To Blame? Thoughts from Dr. Joel Jahraus, eating disorders expert.


HOW FAR INSIDE CAN RILEY GO?
Well, there's a two-page spread to start things off called "Red Carpet", which features six celebs in J. Mendel eveningware. The last one is Lauren Bush, whose gown and hair were both applied by pitchfork. But I didn't notice her on the first pass.

This is followed by a single page of three celebs in coats, who were rated by "100 people in NYC's Rockefeller Center." I'm hoping they were tourists. Managed to turn the page.

Then, some red meat, and a page with actual words: "Loose Talk: What The Stars Said This Week". A page too far, as it turns out:

"I was sick of me. But I'm over that now. I'm ready to return to your TV 24 hours a day!" -Justin Timberlake, On why he took a break from recording.

Look, I didn't get this old without learning anything, so I was careful to read the thing while lying on a futon, with no glass or sharp objects nearby. The spinning sensation abated in a couple of minutes, and by the time five had passed, and I'd tossed down some Booker Noe's, I was even able to wonder why Justin Timberlake's presence would be required at one of his recording sessions.

You're probably ahead of me at this point; I shouldn't have had that drink. It steadied me enough to flip the page, where I found "Hot Pics!" (I guess they save the exclamation points for inside.) Suitably warned, I pulled my sweatshirt sleeve over my hand before I handled any. Our first hottie was Sienna Miller, "munch[ing] on honeydew melon Jan. 9 on the Louisiana set of her upcoming Andy Warhol flick, Factory Girl, in which she plays 1960s drug addict Edie Sedgwick." 1960s drug addict! They said it like it's a bad thing, when the truth is there isn't a single celebrity in the damn magazine who wouldn't be improved by a serious scag habit.
Email ThisBlogThis!Share to TwitterShare to FacebookShare to Pinterest

If it helps any, and I fail to see why it would, there's a Lindsay Lohan Barbie doll. She stars in an animated movie with the bighead Barbies, the My Scene dolls. That's probably enough to give you an eating disorder right there.

And you're lucky. We actually pay for this kind of crap. One of our housemates buys these at the grocery store every time we go shopping. (The housemates do not pay groceries, rent, or utilities, since they're supposed to be saving up for a place so they can move the hell out, but after more than a year with no evidence of same, I'm beginning to doubt that there will *ever* be an exit strategy.)
So not only do I have to move the damned things when they pile up on my coffee table, I have to pay for them.
No good deed, kids, goes unpunished. If your friends end up with a choice between living with you or in a cardboard box, buy them some nice tarps and wish them well. It's the only way you'll stay friends. Especially if you're the sort of doormats my partner and I clearly are.

the bighead Barbies, the My Scene dolls.

I first read that as Mycenaean, honest. But that would be silly. Everyone knows the bigheaded Barbies prefer Trojans.

My bighead Barbies are all dykes, actually. They prefer Amazons.
I don't have the Lindsay Lohan doll, because she's hideous, but she would be too.

Hey, have you *seen* Ken?
None of them want any part of him. And we won't even talk about "River".