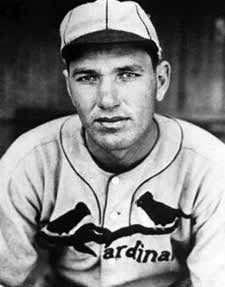 The last National League pitcher to win thirty games, Diz and Peewee Reese doing the Saturday Game of the Week was a fixture of my childhood. Diz's English was not up to PISA standards: runners "slud" into base; good hitters had "parr" in their swings. "Nonchalant" was one of his favorite words. Players stood, knelt in the on-deck circle, swung or fielded nonchalant. Once after a play at first, when a cameraman was caught slightly off guard and the screen filled with a shot of Yogi from the knees down, Dizzy announced, "Here comes Berra's shin guards walkin' nonchalant back to the plate."

Diz was part natural philosopher. After remarking that somebody's bat "looked like a big ol' stump," he continued: "Now, some of you city people might not know what a stump is. Well, a stump is a wood thing...it's somethin' a tree has been cut down offa."
Email ThisBlogThis!Share to TwitterShare to FacebookShare to Pinterest

I Have Heard - probably from Reader's Digest or similarly authoritative source - that Ol' Diz got hacked off one afternoon at someone criticizing his inventive approach to grammar, syntax, and vocabulary. He proceeded to call the inning(? rest of the game?) in a perfectly educated and perfectly drab monotone. Dunno if he got an apology, but apparently the comeuppance was delivered and he never had to resort to such desperate measures again.

the old story is that a lot of english teachers gave dizzy hell for his misuse of english.

his reply, iirc, was "a lotta folks who don't say ain't ain't eatin'."

dizzy dean and satchel paige -- that was back in the days when men were men, and characters were characters.

Saturday Game of the Week, Dean and Peewee Reese broadcasting. Boring game.
Between pitches, the cameraman keeps showing a couple making out in the stands.

Finally, Dizzy says something like: "I got it figured out, Peewee. He kisses her on the strikes, and she kisses him on the balls."